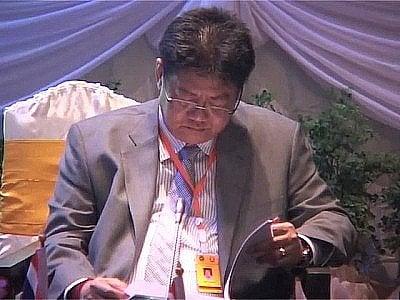 PHUKET: Surin Pitsuwan, Secretary-General of the Association of South East Asian Nations (ASEAN), yesterday warned that the rise in wealth throughout the ASEAN member states will bring a new wave of health issues to the region.

“The formation of the ASEAN Economic Community in 2015 will make some people richer. With their new lifestyle will come new health issues; non-communicable diseases such as high blood pressure, heart disease, lung disease, and diabetes,” said Mr Surin.

“The causes may include lack of exercise, consuming too much alcohol or smoking too much. ASEAN must pay more attention to this issue, because the integration of the economies of each country may cause serious health problems,” he warned.

“Consideration should be given to any free trade marketing agreement that covers the import or export of alcohol, cigarettes or food,” Mr Surin added.

The ASEAN Secretary-General’s warning was delivered at the 11th ASEAN Health Ministers’ Meeting (AHMM), which began in Phuket on Monday and concluded today.

Held at the Mövenpick Hotel & Resort in Karon, the agenda focused on solving the main health problems and developing an ASEAN Public Health system.

Among the top items on the agenda were combating the rising incidence of HIV/AIDS and laying the foundation for a common public healthcare platform across ASEAN.

Although it was agreed that to include the ASEAN+3 group (China, Japan and Korea), any memorandum to adopt a common ruling that would allow foreign citizens to be treated free of charge in a fellow ASEAN country, would have to be ratified at the annual ASEAN Summit Meeting and the UN General Assembly.

Other aspects targeted by the Health Ministers were forming a coordinated response to a United Nations agreement concerning the spread of disease, including non-communicable diseases, by adopting the indicators and criteria laid down by the World Health Organization (WHO).

Also, the ministers discussed putting a stop to the tobacco and liquor industries promoting themselves under the guise of ‘corporate social responsibility’ strategies, such as community projects and similar.

Measures to combat tobacco and alcohol abuse, and the subsequent health problems, also included examining taxes levied against those products and their exclusion from ASEAN Free Trade Agreements.

The Health Ministers of the 10 member countries also discussed the creation of a framework to encourage the coordination among the epidemiology fieldwork network.

This would include establishing measures to prevent and manage emerging-reemerging infectious diseases, especially dengue fever and drug-resistant Malaria, using a network of epidemiologists in the field.

Mr Wittaya believes that Thailand could provide the backbone of an epidemiology expert network for ASEAN.

The meeting also focused on the impact of public health after entering the ASEAN Economic Community in 2015.

“It will mean that within ASEAN countries, people, goods and finances will be able to travel freely,” said Mr Wittaya.

“Each country will have to develop a healthcare system for their own country capable of treating other ASEAN countries’ citizens. It is better to work together than do it alone,” he said.

Aussie tourist airlifted to Bangkok after fall from Phuket tuk-tuk