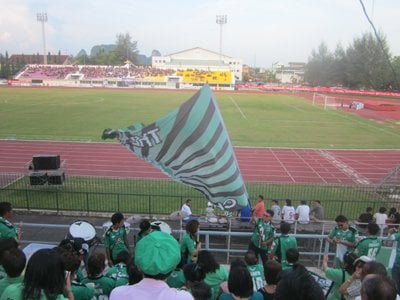 Following a tense yet scoreless first half, Phatthalung’s leading scorer Siwapong Jarersin broke the deadlock three minutes into the second half, his sixth of the season.

Phuket answered seven minutes later with a strike by Thawadech Aunthong – his second score this season.

The match got wide attention in national Thai media this morning, but not for what happened on the pitch so much, but as to what almost happened in the stands.

Moments after the whistle ended the first half, a brawl among Phuket and Phatthalung fans nearly erupted after some objects were launched from the home stands into an area occupied by the visiting Phuket “Hulk”. One young female fan was allegedly hit by a bottle during the incident.

Fortunately security guards were able intervene and calm the fans down before the situation got out of hand.

Leading up to the spat, Phuket fans were in a foul mood for what seemed to be biased officiating in favor of the home side, while Phatthalung fans were likewise bitter, after losing a man, red-carded, early in the game.

To view all the goals and the ugly scenes click here.

Content with the result, some sixty Phuket fans boarded the bus which they had been on all day since 7am, arriving back home in Phuket by 3am this morning.

For full match report, see the Phuket Gazette on stands this Saturday