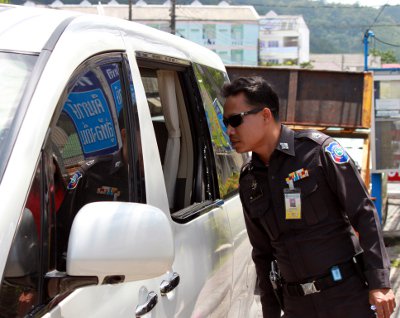 PHUKET: Police are searching vehicles leaving the island and passengers departing via Phuket International Airport are being subjected to more rigorous bag searches following the theft of 30 million baht of jewelry from a parked van near Phuket Town this morning.

The theft was discovered at about 9:45am by Thongsak Chintakanroek, whose Toyota Alphard Hybrid had a window smashed and a suitcase containing the now-missing jewelry stolen.

The Toyota multi-purpose vehicle (MPV) was parked on the street behind the popular Big C shopping center on Phuket’s bypass road.

Mr Thongsak, a 46-year-old jeweler and owner of Expert Gems, a shop in the Jewelry Trade Center on Silom Road, Bangkok, and a sales and marketing assistant stayed last night at a hotel on the street.

The two were to showcase the jewelry at the week-long Jewelry Fair at Central Festival Phuket nearby.

Having left their hotel this morning, Mr Thongsak and his employee stopped for breakfast near the Big C supercenter.

“After we had some noodles, we walked back to the van and found the windows broken and the jewelry gone. I called the police immediately,” Mr Thongsak said.

Phuket Police and the Phuket Tourist Police all arrived at the scene within 10 minutes of being contacted.

CCTV footage from the scene revealed three foreigners – two male and one female – driving away from the area in a Toyota Vios.

Although the CCTV footage shows the gang in possession of the black suitcase taken from Mr Thongsak’s van, it does not show the gang breaking into the vehicle or give any indication as to why the car alarm failed to alert people in the area.

Mr Thongsak said that the van was fitted with an alarm, but he and his assistant did not hear any alarms while they were sitting in the noodle shop, which was only 10 meters away.

The police investigation has already revealed that the three foreigners followed Mr Thongsak back to his hotel last night and checked in there.

This was Mr Thongsak’s seventh visit to Phuket to showcase his jewelry.

“Because I have come down to the fair many times before, I believed Phuket to be a safe place. I did not think I would have any trouble,” he said.

“I chose all of my best jewelry from the shop for the fair, but it wasn’t insured,” he said.

“I believe that the police will catch the thieves soon,” he added.

Mr Thongsak was doubtful he would be able to identify any of the thieves, especially considering their faces were obscured from the CCTV cameras by an umbrella.

“My shop has been open for more than 10 years and I have about 100 customers a day, so I wouldn’t even remember if the thieves used to come into my shop or not,” he said.