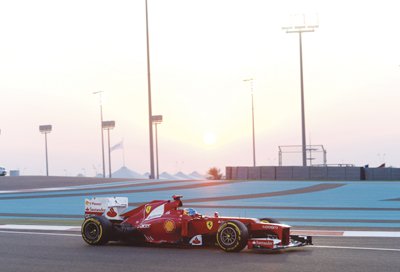 PHUKET: The USA GP has been run sporadically since the “American Grand Prize” of 1908. Since then, 41 GPs have been held at nine locations – most recently at the Indianapolis Motor Speedway from 2000-2007.

The USA is an important market for F1 and for team sponsors, so a USA GP is highly desirable. But American fans historically have been less than enthralled, and of course there is no American team in F1.

Indianapolis was never a great F1 venue. To make matters worse, the 2005 GP was a fiasco. Following tyre failures before the race, Michelin advised that the tyres they had brought were not safe for the whole race; 2005 rules did not allow tyre changes.

The FIA refused all proposed compromises. Fourteen entrants, on Michelin tyres, completed the mandatory parade lap, and immediately retired. We were treated to Ferrari, Jordan and Minardi effectively parading their six Bridgestone shod cars when spectators had paid to see a race.

In 2010, Bernie announced plans for a New Jersey GP for the 2012 season. Two months later, Austin, Texas, was awarded the race on a ten-year contract. Austin has the USA’s first purpose built F1 track, so American fans should finally get to see a real F1 GP. And it looks like the bleachers will be full, which is great news.

The 5.51 kilometer anti-clockwise track was designed by Hermann Tilke, who also designed the Sepang, Shanghai, Yas Marina, Istanbul, Bahrain, Yeongam, and Buddh circuits. We do not know what it will be like, but we can try to guess.

It looks to be most similar to Abu Dhabi, but it seems to have pieces of many great tracks, with the sweeping Suzuka Esseses and Turn 8 from Istanbul.

There are several gradient changes, particularly in sector one. The lap starts with an uphill straight leading to a blind apex at the hairpin which is Turn 1, and then to a number of high-speed corners like the Maggotts-Becketts-Chapel sequence from Silverstone. This leads to Turn 11, another hairpin, and a long back straight followed by a couple of slow-speed corners where the DRS zone should be. A multi-apex long right hander brings up Turn 20 and the Start/Finish straight. There looks to be good conventional overtaking opportunities.

Weather will be cool. Cars will have similar downforce settings to Abu Dhabi, and Pirelli will bring the same hard and medium tyres. This is conservative, as is usual on a new track, and probably means two stop strategies, with a possibility of some one-stoppers.

Whom will it suit? McLaren will be very bullish, as long as they can evict their gremlins. Lotus is going to be confident as well, and Alsonso will almost certainly get a podium position.

So, Vettel has his work cut out to seal the Championship in his 100th GP.

HRT looks unlikely to trouble the scorers, and the team in now up for sale. Mercedes is talking up its “Double DRS”, but while Schumacher may not win at Austin, he will compete in the Race of Champions at Rajamangala Stadium in Bangkok, December 14-16.

The US GP is at 2am on Monday. Qualifying is at 1am on Sunday. If they had started the race at their breakfast time it would have been much more convenient for us; perhaps they did not consider that.

But nevertheless I shall be watching, together with Evan Williams and my Security Director, and any other hardy souls who care to join us at the Greenman, Chalong.

The race will be shown live at the Green Man on Monday at 2am. Click here for more information.