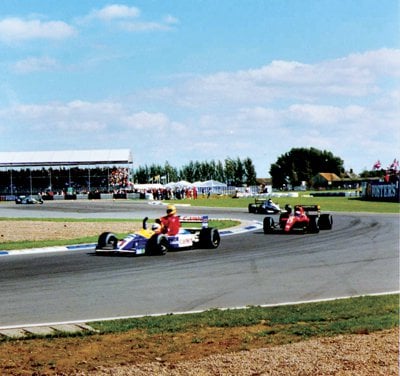 PHUKET: Sebastian Vettel knows how to celebrate victory, but he is bad loser. That is one reason it is fun when he loses. After the race at Valencia, he said the “safety car” which took away his lead was not needed and “in a sense was to break our necks.”

But hold on a minute, Vettel (and Romain Grosjean) retired because the Renault alternator failed. Renault has no answer yet as to why they failed, but the two cars had different faults. Unless the alternators failed because of their time behind the Safety Car, Vettel has little cause to whinge.

Vettel’s comments were exacerbated by Helmut Marko who said “Vettel was too far ahead and so the field was brought back together.” This hints at a Red Bull feeling that they are the paddock’s target. Their 2011 season winning technology was specifically outlawed, as was their honeycomb floor this year. Why should they be hated? Paranoia would say it is fueled by envy that they are successful, not a major constructor, and like Ferrari have a sweet deal with Bernie Ecclestone.

So who is Helmut Marko? Since 2005 he has been advisor to the Red Bull Racing F1 Team. From 1999 he has overseen the Red Bull driver development programme, which inter alia nurtured Sebastian Vettel. He is also a man of substance, a doctor of law who owns two Austrian Hotels.

From one Germanic professional causing controversy, to another. Gerhard Gribkowsky is the German banker who took bribes from Bernie Ecclestone in connection with BayernLB’s 2006 sale of F1 shares to private equity. He has just been jailed. In essence Gribkowsky says Bernie bribed him, and Bernie says Gribkowsky blackmailed him. This has led to a review of Bernie’s affairs both by Her Majesty’s Revenue & Customs and The Serious Fraud Office.

Meanwhile the private equity firm has been reducing its F1 interest, and may itself have a case to bring. Uncomfortable times for Bernie, but he says he will go to Hockenheim, and appears confident he faces no impending German prosecution.

Bernie has driven F1 very successfully, but there are huge challenges ahead. F1 requires sponsors, governments, fans, teams and circuits. A corruption scandal could scupper sponsorship deals, with sponsors already suffering in the global economy. It could also endanger government subsidies if it becomes a national Cause Célèbre.

In 2004, Bernie offered £260,000,000 over three years in return for unanimous renewal of the then current Concorde Agreement. After many negotiations all the teams agreed in some way at least until 31st December 2012. But it is now urgent to conclude a new agreement.

So a strong captain is needed, and while other names have been touted, no-one has yet emerged to take-over Bernie’s role in this set of complexities.

Returning to this weekend, the deserted 1943 bomber airfield was used for an impromptu 1947 race in which one organizer ran over a sheep. The sheep was killed, the car written off, and the event is also known as the Mutton Grand Prix. In 1948 the RAC leased the airfield. Their first two races were held on the airfield’s classic WWII triangle format runways, with long straights separated by tight hairpin corners, the track demarcated by hay bales.

For the 1949 International Trophy meeting, racing switched to the perimeter track. In 1952 the start line was moved, and that layout remained largely unaltered for 35 years. For the 1975 meeting a chicane was introduced to tame speeds through the mighty Woodcote Corner. There was a major redesign between the 1990 and 1991 races, transforming the ultra-fast track into a more technical one.

The new track’s first F1 race saw Nigel Mansell winning in front of his home crowd. On his victory lap Mansell picked up stranded rival Ayrton Senna who had run out of fuel and give him a lift on his side-pod.

Following the deaths of Senna and Ratzenberger at Imola in 1994, many Grand Prix circuits were modified to reduce speed, and the Abbey kink became a chicane. The entry from Hangar Straight into Stowe Corner was modified in 1995 to make it less dangerous and less challenging.

Red Bull looked frighteningly strong at Valencia and must fancy their chances at Silverstone. But the 3.7 mile lap race is wide open. It’s the British GP, so expect rain. That will play to Hamilton, Alonso, Vettel and Raikkonen. So I think it will not change the leading group. It could help Button, who needs it, and disadvantage Massa, who does not need that.

Last year, it was Alonso, Vettel, Webber, Hamilton. This year might not be so different, but it would be nice to see Grosjean there (click here for current standings). He got married last Wednesday, I expect I know what present he would like this weekend.

Is it possible ESPN will have less annoying advertisements than Sky Sports? We know we pay to see sport by having commercials. But when we have to leap up to turn down the sound because the ads blast our ears, it’s bad. There is one particularly awful advertisement (for what I know not) that has been recorded to sound as if it is on an unloved and badly scratched 12 inch LP. The screeches are hideous in surround sound.

And when we lose the action just to watch the TV station advertise itself, that is surely counter productive. Could they not, at the very least, continue to show the race during the adverts as picture in picture? Certainly the technology is already there.

Qualifying on Saturday, and the race on Sunday, both at 7pm, will be shown live at The GreenMan. Click here for more information.