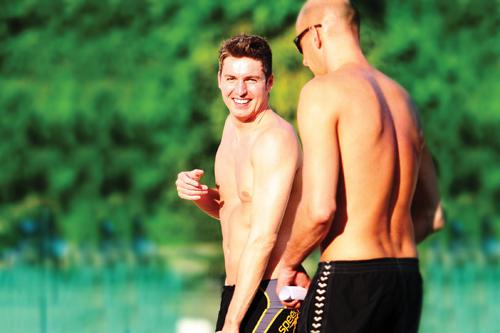 PHUKET: With thoughts firmly on the upcoming 15th FINA World Championships to be held in Barcelona, Spain from July 19 to August 4, Dutch swimmers, Ranomi Kromowidjojo and Femke Heemskerk, along with Italian swimmers, Federica Pellegrini and Filippo Magnani, are currently training at Thanyapura Sports and Leisure Club (TSLC).

“We came here because now in Holland it’s winter and people tend to get sick this time of year. It’s healthier for the athletes to be outdoors in the sun training at this tremendous facility.”

The Dutch team also invited retired Olympic hero of the Sydney and Athens games, and one of the greatest swimmers of all time – Pieter van den Hoogenband – to Thanyapura.

Hoogenband is there primarily to pass on his experience and knowledge of what it takes to become an Olympic champion to the other swimmers. One of those experiences was breaking the 100m freestyle world record in the semifinals at the 2000 Sydney Olympics.

“I faced Alexander Popov and I knew that to beat Popov, I had to swim under 48 seconds, which to do at that time would be a world record. It was fantastic when I touched the wall at the end of my race, looked up at the scoreboard and heard the roar from the fans as I had finished in 47:84. But then I had to do it all again in the final.”

Ranomi Kromowidjojo and Femke Heemskerk both admitted that they took a long holiday after their exploits at the London Olympics and did things that their grueling training schedules in the lead up to the Olympics prohibited them from doing.

“I had a long break after the Olympics, went on holiday and spent time with friends. I did things I have not had the chance to do in the last few years,” Ranomi said.

The fact that the Italian and Dutch swimmers will be competing in Barcelona doesn’t add any rivalry to the training sessions. In fact, Jacco Verhaeren sees it as a positive thing:

“We are not really battling as we are actually quite good friends with them [Federica Pellegrini and Filippo Magnani]. It’s exciting for the swimmers as they get to see each other train and luckily swimming is an open community where people learn from each other.”

The facilities at Thanyapura impressed the Dutch Olympic swim team so much that they have signed a deal to use the facility for the next three years. Pieter van den Hoogenband echos the sentiments of his fellow Dutch swimmers.

“I have always been looking for the best facilities and my coach and team manager told me they’d found something special and you have to see it,” Pieter told the
Gazette. “It will inspire you to swim a little bit they told me. I find myself swimming two times a day.”

Pieters’ training schedule is a bit more relaxed than the 10 pool sessions, three weight sessions and three dry land sessions a week the swimmers preparing for the World Championships are currently undertaking at TSLC.