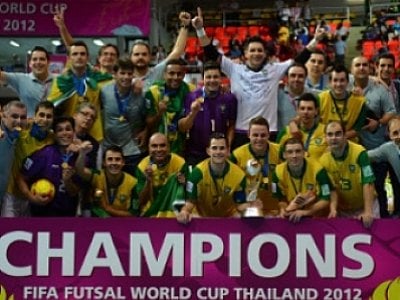 Meanwhile, the previous number one, Spain unofficially become the world’s second best team after holding the top ranking for the past two years.

Brazil concluded their dominance of the FIFA Futsal World Cup 2012, winning all seven of their matches in the tournament, beating Spain 3-2 in the final at the Indoor Stadium, Huamark.

The unofficial world rankings were updated regularly throughout the tournament.

The victory was Brazil’s fifth World Cup title and the match was a repeat of the 2008 encounter, which Brazil also won.

The match finished 2-2 after normal time and it took a goal from Neto 19 seconds from the end of extra time to win the match for Brazil.

Falcao was at the heart of Brazil’s fightback. The current world champions were trailing with time running out, until the inspirational midfielder equalized with three minutes of normal time remaining to take the match into extra time.

In the match for third place, a goalless first half left everything to play for in the second half between Italy and Colombia.

Unfortunately for the South Americans, their European opponents were too strong and won the match thanks to two goals from Rodolfo Fortino and a strike from Sergio Romano.

Colombia’s keeper Juan Lozano suffered the heartbreak of being sent off in the second half.

Lozano played a key role in Colombia’s progression in the tournament, pulling off a number of world class saves to help his team upset a number of bigger name nations.

His sending off came in the 32nd minute for a deliberate handball outside the box. A sobbing Lozano left the pitch to a standing ovation from the crowd.

The adidas Golden Ball award for player of the tournament went to Neto of Brazil, who scored seven goals including two in the final. Kike of Spain was second and Ricardinho of Portugal was third.

The adidas Golden Boot for top goal scorer of the tournament went to Brazilian born Eder Lima of Russia with nine goals. Rodolfo Fortinho of Italy was second with eight and Brazil’s Fernandinho was third with seven.

The adidas Golden Glove for best goalkeeper went to Stefano Mammarrella of Italy.

The next edition of the Futsal World Cup in four years time has attracted interest from France, Iran, Colombia, Puerto Rico, Spain and the Czech Republic to host it.

For a complete wrap-up of this year’s World Cup, see this link on the FIFA website.