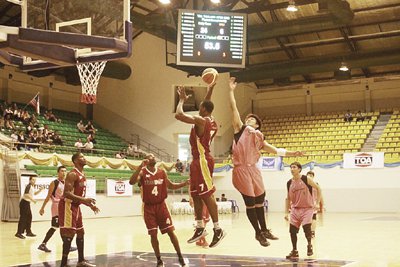 PHUKET: Thailand’s most significant international basketball tournament has livened up Phuket Town’s brand new 4,000 seat Gymnasium with some fast-paced, slam-dunk and swooshing action this past week.

The third and fourth playoff will see PEA (THAI) take on CLS Knights (INA) at 2pm with the final to be played at 4pm which will test the Rising Stars (Thai) against the favorites Team Unity (USA).

Indoor sports enthusiasts should not miss this golden opportunity.

The tournament has featured six high quality, international-standard teams, including two from Thailand, and a team each from Australia, Indonesia, Brunei and the USA.

In their first four matches, both Thai teams – the Provincial Electricity Authority (PEA) and the “Rising Stars”, a Thai national all-star squad, including some non-Thai athletes, have all but secured a showing in one of Saturday’s finals thanks to strong performances early on.

In their opening match last Friday, PEA edged the Postnet Gators from Australia, 86-81, however they weren’t able to keep up with the USA’s “Unity Teams” squad, losing on Saturday 74-89.

The PEA boys redeemed themselves the following day in their next match against Brunei’s CS Cold Storage team, stomping their Asean opponents 110-57.

Indonesia’s CLS Knight’s were no match for PEA either on Tuesday, with the home boys prevailing 81-68.

Thailand’s Rising Stars have had a flawless tournament start. In their opener, they breezed past the CLS Knights 94-52, followed by a victory over the Postnet Gators 79-66. Their true test came on Monday evening against the dominant Unity Team side, of which the Thai side narrowly edged their American opponents 80-79.

Cabinet cuts it close with announcement of new Phuket Governor

Phuket Sports: Gonzalo has gone and done it again; Golfing tip of the week