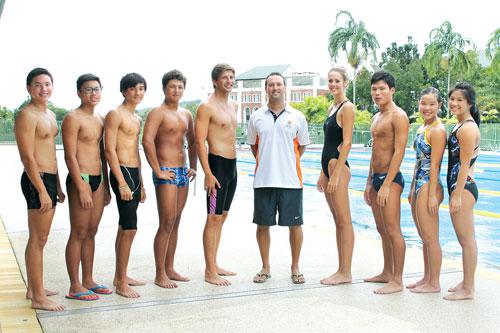 PHUKET: British International School Phuket (BISP) will be announcing the launch of its new football academy at the forthcoming international seven-a-side football tournament (November 8-9, 2013), which is held annually on the school campus.

The aim is to develop a center of footballing excellence in Asia under the coaching auspices of the premier Brazilian football club, Cruzeiro EC. An essential element of the academy is the appointment of a top Cruzeiro professional coach at the school, able to work alongside the BISP sports and PE staff, to develop the academy concept and program.

In October, Cruzeiro EC Youth Coach Jonathas Candido, whose youth team won the Brazilian Cup last year, will be joining the BISP staff. In addition, the school will be awarding scholarships each year to attract the very best young footballers in Asia.

Of equal importance to the development of an academy is the development of close cooperation with Cruzeiro EC and Phuket FC in plans to develop coaching clinics and develop youth football leagues and representative teams on the island, and to produce professional footballers for Phuket FC, Cruzeiro EC or other professional clubs seeking Asian players.

It is hoped that academy players who wish to continue with their studies will be able to obtain sports scholarships in the United States or elsewhere. All academy players will receive a full BISP education, culminated in an IB Diploma, but will be expected to devote most afternoons and weekends to the academy program.

BISP Headmaster Neil Richards said he firmly believes that the school has the capacity to become the premier sports international school in Asia and points to the success of the BISP High Performance Team (HPT) Swimming Academy as a model.

Already several scholarships have been awarded to top international youth swimmers and these are being trained under the watchful eye of the full-time professional coach Simon Jones. Four of the HPT students are swimming at the forthcoming FINA World Cup in Singapore and members of the school team will be represented at the State championships held in Queensland Australia as well as other competitions in the region.

Mr Richards said that further sports academies in the pipeline included Golf and Tennis – which will use the new covered courts facility due to be completed in October. He said that negotiations and discussions are well under way to make these a reality.

Mr Richards acknowledges that the boarding facilities at the school are critical to his vision, because it enables the school to bring top young athletes to live and train in Phuket. However, he does not believe that students should suffer in any way academically.

Accordingly, all the athletes will be required to complete a full day’s schooling on rigorous international curricula. He said that only in this way can he provide a rounded education that will also open up a top university education for the students should it be desired.

Mr Richards is anxious to stress that the school does not revolve around sport, but rather that he is enabling top young athletes to take advantage of the excellent educational opportunities at the school. To make his point, he refers to the large number of single subject IGCSE awards made to BISP this year, more than any other international school in Thailand, including schools with more than twice the number of students.

In addition, he also explained that the school has offered scholarships this year to outstanding academic students from around Asia, including Vietnam, Bangladesh and Thailand, as well as Canada. This academic scholarship program, named after the school’s founder Dr Arthit, will continue alongside the sporting scholarships.

It will be an extraordinary environment for all students, he says, because young people will respond positively to the achievements of their peers and in a climate of excellence, across all disciplines, every student will thrive.

He concludes that the top universities around the world will soon be attracted to the quality of experience of a BISP student, and these will be reflected in the opening up of scholarship opportunities across the globe.

Mr Richards acknowledges that, in the longer term, his vision may result in much greater competition for school places within the local Phuket community, particularly at the ages from fourteen and above where the current scholarships are being offered, and that competition for admission will increase dramatically at these age groups.

He believes, however, that this will prove to be a good thing in the long run for the local communities, both Thai and foreign. It is important that young people have something worthwhile to aspire to, and by raising the academic and sporting bar he believes there will be a positive knock-on effect across all schools.

This scholarship vision, he acknowledges, would not have been possible without the school board’s commitment to becoming a non-profit institution. By adopting this status, says Mr Richards, he has been free to invest and subsequently to re-invest in the development of academic excellence and the sports academies.

The headmaster has not yet completed two full years at the school, but said he remains confident that the impact of the school will be felt across Asia in the very near future, and that this will have an extremely positive affect upon Phuket as a whole.