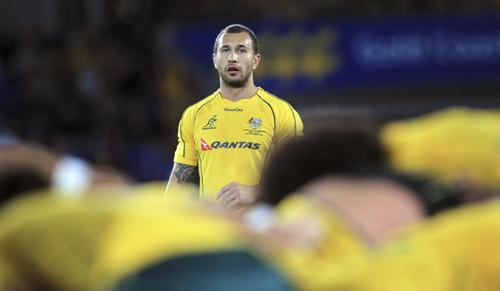 The 24-year-old New Zealand-born back is currently honing his punching skills in Brisbane ahead of the charity bout which will keep him out of the Queensland Reds’ second and final pre-season trial.

When he steps into the ring at the Brisbane Entertainment Centre on February 8 on the undercard of close friend and former All Black Sonny Bill Williams’ bout with Francois Botha, Cooper will confront a 32-year-old rival with some credentials as a fighter.

“He’s fought for a Queensland light heavyweight Thai boxing title. He’s had two pro-boxing fights, one win and one loss, in 2010,” Shannon King, whose Corporate Box facility Dunnett used for practice, was quoted as saying by the Brisbane Times.

“He’s not a basketball player turned boxer. It’s all he’s done for the past eight years as a sport. If he goes down, it will be because he’s sleeping, or because he’s got a rib pushing on a vital organ. He won’t give up,” King added.

According to the report, Dunnett has fought 15 times under Muay Thai rules which allow the use of elbow and knee, and the pair will meet for the first time tomorrow at a media session.

On the rugby field Cooper was a shadow of his creative self last year, producing a number of below-par performances after recovering from a serious knee injury and featuring in a well-publicised spats with the governing body.

His boxing venture appeared to have the backing of Queensland Reds coach Ewan McKenzie.

“If you are going to put yourself out there in front of a big TV audience and a crowd one-on-one … you can’t help think he is getting some benefit from a confidence point of view,” McKenzie told reporters on Tuesday.

“He’s been getting his boxing done around normal training. The quality of his rugby training has been outstanding, he seems in a very good space.”