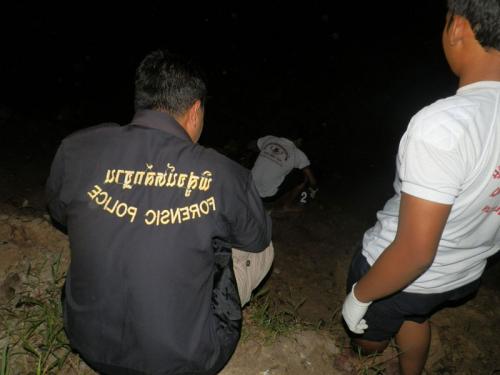 PHUKET: The body of an unidentified Asian man with head wounds and heavy bruising was found floating in a canal near Layan Beach (map here) on Phuket’s west coast, in the early hours of this morning.

“We received a report at about 3am from the fisherman who discovered the body. We believe the body was in the water for about three hours before it was found,” Cherng Talay Police Deputy Superintendent Sarit Bootnongsaeng told the Phuket Gazette.

Police believe the man was 40 to 45 years old at the time of death. He was found still clutching a blue shirt and was wearing blue shorts, which had paint splotches on them, leading police to think the man might have been a painter.

“Chairat Kaewwiset, who discovered the body, told me he was on his way back from fishing when he noticed blood marks beside the water. He turned on his flashlight to investigate and then found the body,” Lt Col Sarit said.

“We could still smell alcohol on the body,” he added.

Police conjectured that the man might have had an argument with someone before he was beaten to death and thrown into the canal.

“Anyone with information that might help us identify the body, please contact the Cherng Talay Police at 076-325630,” Lt Col Sarit said.