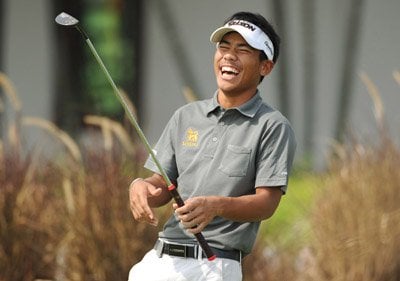 The 17-year-old Tabuena, the youngest member on the Asian Tour this year, is currently three spots outside the top-61 of the Order of Merit which is the cut-off for players to secure full playing rights for the 2012 season while Thanyakon is on slightly safer ground in 58th position.

With a US$1 million purse on offer in the star-studded inaugural event headlined by world number three Lee Westwood and Major champions Charl Schwartzel and Darren Clarke, Tabuena admitted the pressure is on at the Amata Spring Country Club as he seeks to ensure a successful rookie season on Asia’s elite circuit.

“I’m feeling nervous. I hope to get a good start but anything can happen,” said Tabuena, who came through Qualifying School while still an amateur.

“I’m very happy to be in the field (as he was on the reserve list until Monday). It gives me a last chance to be in the top-61 and I hope I do well. It was a nervous wait but my coach Rick Gibson just told me to take a flight to Thailand.

“There was no pressure in Q-school but there’s more pressure here now. This is my living and we’re playing for money. Rick and Angelo Que have given me a lot of encouragement.”

With US$59,447 to his name this year, Tabuena enjoyed a career first top-five on the Asian Tour at last month’s Mercuries Taiwan Masters which boosted his hopes of securing his card. He followed up with a tied 29th outing at the co-sanctioned Iskandar Johor Open in Malaysia.

“I’ve been playing good the past four weeks,” said Tabuena, who is home schooled. “I’ve learned a lot this year. I’m happy I turned pro. I’ve learnt a lot and it’s all part of the process. You need to have a lot of self confidence and you need to work hard. It’s not easy to be at the top. If you work hard, you’ll be rewarded.

“I’ll try to make the cut first here, which is the first goal and then play aggressive and see how well I can do,” he added.

The 21-year-old Thanyakon, who came through Qualifying School as well after winning on the Asian Development Tour last season, knows he faces an uphill task at Amata Spring as the course doesn’t suit his game.

“We’re playing on a long golf course and I’m a relatively short hitter. It is also windy on the golf course which will make it tough. I didn’t play well at the start of the year but of late, I changed my swing and I’ve played better since. “There is a bit of pressure and I’m hoping to do well to secure my card this week.”

The revenue of sale of tournament passes will be given to a charity organization for Thailand’s current flood relief.