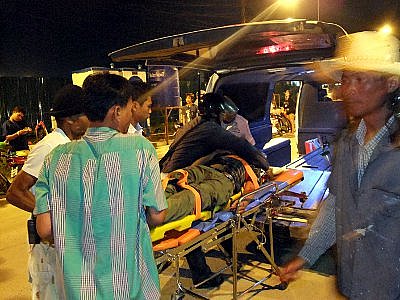 PHUKET: After two days of the Songkran ‘Seven Days of Danger’ road safety campaign, not a single person has died in a road accident in Phuket, but that hasn’t stopped drunk drivers from spilling onto the roads and into the hospitals.

According to the Phuket office of the Department of Disaster Prevention and Mitigation (DDPM), which is compiling road-toll statistics for the duration of the safety campaign, drunk driving is the number one cause for the nine motorbike accidents recorded since the campaign began at midday on April 11.

Ten people involved in the accidents have received hospital treatment: four in Phuket City, four in Kathu and two in Thalang.

Four of the accidents involved drunk drivers. The rest involved speeding, overtaking in the wrong lane and “hitting an obstruction on the road”, say the statistics.

Highlighting a typical accident in Patong Beach, police there reported a 25-year-old Burmese man suffering a serious head injury after falling off his motorbike drunk.

Named only as “Kuli” on his Thai-issued ID card, the man fell off his motorbike while driving along Soi Wastewater, the road beside the wastewater treatment plant, around 8:30pm yesterday.

He works at a souvenir stall at the nearby Patong OTOP Shopping Plaza on Rat-U-Thit 200 Pi Road, police said.

Kuli was rushed to Patong Hospital by Kusoldham Foundation rescue workers to be treated for the serious head injury he sustained in the fall.

Nationwide, the DDPM in its latest release this morning reported the national road toll for the holidays currently stands at 893 accidents, leaving 59 people dead and 976 injured.

No late closing times for Phuket bars during Songkran