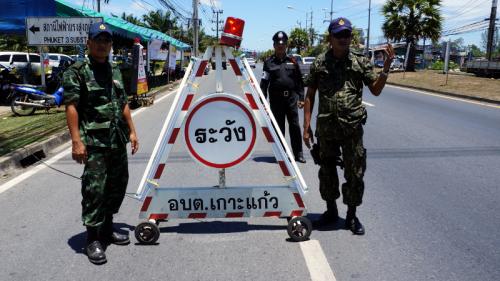 PHUKET: The nationwide Seven Days of Danger road safety campaign ended at midnight last night, with the official tally of no deaths in Phuket to remain as the formal record forever, the chief of the Department of Disaster Prevention and Mitigation Phuket office (DDPM-Phuket) has confirmed.

Officers at the DDPM-Phuket, when contacted by the Phuket Gazette today, said they had received no report from Vachira Phuket Hospital of the death of 75-year-old Phuket native Jingiang Jamreunnam.

As reported by the Gazette, Mr Jingiang died early Wednesday morning from injuries sustained in a motorbike accident in Phuket Town on Tuesday morning (story here).

The officers explained that the DDPM’s official tally is based on reports sent from representatives of the National Institute for Emergency Medicine (NIEM), which reports deaths in emergency rooms.

According to Vachira Hospital, Mr Jingiang had been moved out of the emergency room and died in another ward.

Officers from the DDPM-Phuket explained to the Gazette today that they do not follow up on victims after they have been admitted to the hospital, but base their statistics only on reports they receive from the NIEM.

Sun Jantarawong, chief of DDPM-Phuket, told the Gazette that he had not yet received any documents from NIEM confirming Mr Jingiang’s death, and could not change the death toll without those documents.

“Now that the official period for the Seven Days of Danger campaign ended at midnight last night, the opportunity to correct the official tally has passed. We cannot correct the figure as the time for our office to receive the official reports has closed,” Mr Sun said.

On the last day of the Seven Days of Danger this year, there were two reported accidents, according to the DDPM.

The first occurred at 4pm, when Chuliporn Timpumriang, 47, was involved in a motorbike-on-motorbike collision and fell in front of the Baan Nai Khlam Mosque on Thepkrasattri Road. She was taken to Thalang Hospital with broken ribs.

At 8:30pm, Somkiat Aolurknoy, 22, was riding his motorbike at high speed when he hit a pedestrian who was crossing the road in front of Mission Hospital Phuket on Thepkrasattri Road. Both were treated at Mission Hospital: the driver for injuries to his head, the pedestrian for scratches.

The total number of reported road accidents in Phuket for the Seven Days of Danger was 26, according to the DDPM-Phuket.

This year, a total of 343 drivers were stopped for suspicion of speeding, but none were ticketed.

For the seven-day period over Songkran, police at static checkpoints reported stopping and checking 25,250 vehicles and citing 3,100 motorists for the following traffic offenses:

Riding a motorbike without wearing a helmet – 1,116

Driver and/or passengers failing to use seat belts – 189

Driving under the influence of alcohol – 147

Failing to stop at a red traffic light – 13

Overtaking in a restricted zone – 6

Using a cell phone while driving – 126