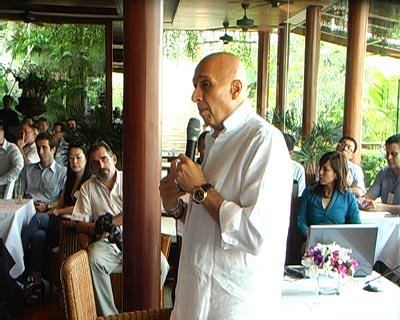 PHUKET: The American Chamber of Commerce (AMCHAM) Greater Phuket chapter held an event last week where record crowds turned out to hear Hong Kong billionaire Dr Allan Zeman give his thoughts on what it takes to make a business venture successful.

Hundreds of Phuket developers, resort industry professionals and business people packed into the chic Silk restaurant at Andara Resort and Villas in Kamala to hear what the “Father of Lan Kwai Fong” had to say.

Mr Zeman came to fame in Hong Kong when he purchased an entire block in the city’s Central district in 1984, transforming it into the world-renowned restaurant and nightlife area that it is today.

Twenty years later he was invited to become Chairman of Hong Kong’s Ocean Park and managed to increase profits there despite the opening of Disneyland in Hong Kong.

“When you do business in a foreign country, the most important thing to learn is to first understand the culture of your customer. Where does your customer come from? What are they used to doing?” Mr Zeman said.

“Culture takes many, many centuries to change, so if you want to be successful, the most important thing you can do is adapt the way you do business to fit into the culture.

“Those of us that are living out here in Asia are very lucky. There is a tremendous shift from west to east, a paradigm shift. Europe as we know it, is in many ways a basket case, the same with North America. China is slowly starting to lead the world and has US$3.25 trillion in reserves. America is bankrupt and Europe is not much better off. So, the wealth is really coming out here.” he added.

After building his dream holiday home, Chandara, in Phuket, Allan Zeman realized the potential of the high-end resort market here and built Andara Resort & Villas and the Plaza Surin boutique shopping center. He believes Phuket has a great future.

“I’ve always been enchanted with this island. There’s a magic here: there’s the Thai culture, the food, the beaches, the weather, the natural environment. I’d say this place is blessed. I’ve always said that it’s one of the best places in the world,” said Mr Zeman

Given the success of Andara, which is now nearly sold out, the Phuket Gazette asked if there will ever be an Andara 2.

“You want to keep some exclusivity for current owners, so Andara will not expand. But we will be doing a sister project, Suandara, which is down the road and we’re getting the land registered and [taking care of] all the [other] necessary requirements.

“We are also building a new, bigger plaza across the road from Surin Plaza, with 54 shops, a restaurant on top, glass lift, escalators – a special landmark.

Uniforms: fashion or ‘fitting in’ around Phuket?