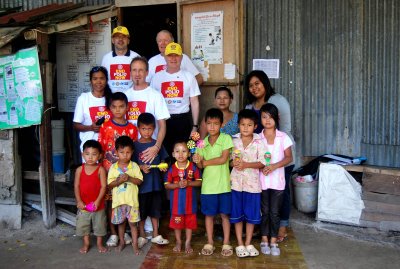 Orachorn Saisrithong, district governor of Rotary International (RI) District 3330 covering all of Southern Thailand and parts of Central Thailand, said that the Bill and Melinda Gates Foundation has awarded a US$355-million grant to RI’s Polio Plus Fund.

In response, the RI has pledged to raise an additional US$200mn as part of an End Polio Now campaign aimed at eradicating polio worldwide, Ms Orachorn said.

Although Thailand has not seen a case of polio in more than a decade, the global battle against the viral infectious disease has yet to be won, said Arunee Suphanan, head of the PPHO Communicable Disease Control and Prevention Division.

“Polio is still a major contagious disease in Nigeria, India, Pakistan and Afghanistan, and although Thailand hasn’t seen a case in 14 years, there is still a possibility it could be found within certain groups of foreign workers,” Ms Arunee said.

“Children who have never received the polio vaccine should get one. We will focus on alien workers’ children because they are at greater risk.

“Our volunteers will administer the vaccines to them no matter where they live, be it on a hill, on a rubber plantation or in very poor communities. In all, we expect to vaccinate about 10,000 children,” she said.

Vaccines will be given out on two dates in Phuket: December 14, this year, and January 18, next year.

On those days, children can get their free polio vaccines at any government hospital or clinic as well as at any of the mobile clinics that will be visiting schools and “at-risk” communities around Phuket.

PPHO Chief Sak Tanchaikul said that after completion of the program, 100 per cent of Thai children and about 95 per cent of migrant children will have been vaccinated.

“It’s difficult to vaccinate all children of migrant workers because they are temporary residents and often move camps,” Mr Sak added.