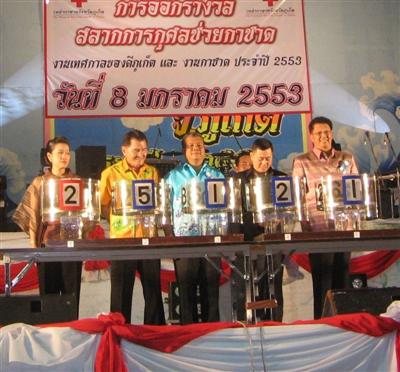 The top prize for the first time ever in Thailand was a detached house on 56 square wah of land in the Phanason Parkville 3 housing estate off Thepkrasattri Rd in Srisoonthorn Village, Thalang District.

The 100-baht tickets for the top prizes were completely sold out.

The winning numbers were as follows:

There were also 80 electric fans for people holding tickets with the final three digits 606.

The Red Cross will announce the winners after they come forward.

Tonight is the final night of the Phuket Red Cross Fair, this year sponsored by Beer Chang.