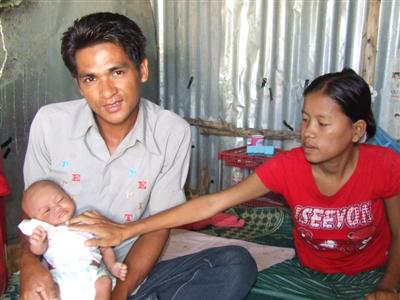 PHUKET: A four-month-old baby girl who was abandoned by the side of the road earlier this week has been united with her parents, but the baby’s safety remains a concern for authorities.

The young baby was found outside a shop house on Palian Road in Ban Kuku, Rassada District just after 7pm on Wednesday by a local resident.

Crying loudly, the girl was wrapped in a blanket with two milk bottles by her side.

The resident alerted Phuket City Police, who arrived at the scene shortly after.

The child was then handed over to the Phuket Shelter for Children and Families.

Shelter chief Jiranan Jiamjaroen said that after local Thai media reported the story the same day, a security guard from the Supalai City Hill project in Ban Kuku suspected the baby’s parents were a young Burmese couple living on the project site where he worked.

The young couple he suspected had a baby about the same age as the one that mysteriously disappeared around the same time.

The security guard contacted the project developers, who in turn alerted the shelter at around noon on Thursday.

Just after 2pm, the young Burmese couple were brought by their boss to the shelter to identify the baby.

On arrival at the shelter, the 23 year-old-man and 20-year-old woman identified the baby girl as their own, but denied abandoning the child.

They claimed they left their baby girl with the woman’s sister, who has since vanished.

“We are sure it was the parents who abandoned the child,” she said.

“The couple told us that the baby was born on the way to Vachira Hospital about four months ago. The couple delivered the baby themselves on the side of the road and never received a birth certificate, Ms Jiranan said.

The couple were brought to Phuket Municipality offices to obtain a birth certificate for the child on Wednesday afternoon, accompanied by Ms Jiranan and police officers.

The couple were then escorted to Phuket City Police Station where their photos were taken, along with several of the baby. The police also made copies of the new birth certificate.

Police said they would be keeping a close eye on the young family.

Officers escorted the family back to their work camp at 7pm on Thursday, and donated milk, diapers and a new baby mattress.

The couple told police they would not abandon the baby again, but that they had very little money to support their child.

Phuket kids have their way on Children’s Day