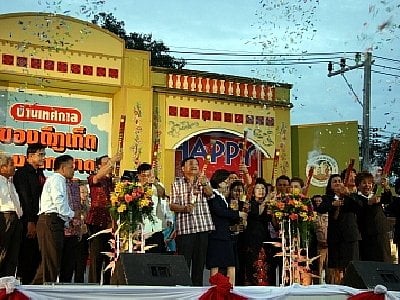 At the opening ceremony, Phuket Governor Tri Augkaradacha, with his wife Nalinee, who is President of the Phuket Red Cross, wished the fair to bring joy and happiness to one and all.

One of the most popular activities at the 11 day-and-night event is the lucky draw.

Top the top prize this year is a duplex townhouse.

Thousands of smaller prizes are to be won in the lucky games at the show.

Live music performances and singing contests will be held on the central stage at the open area bordered by a plethora of food stalls selling local delicacies.

Sweets vendor Amporn Linsa, 30, from Nong Khai told the Gazette, “I took part in the fair last year and Khao Mao (an Isarn sweet made from rice mixed with coconut, sugar and salt) was very popular. So, I decided to come back and set up the stall again this year.”

The fair is open every day from 10am to midnight until January 9.