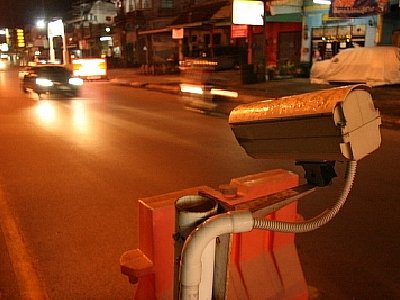 PHUKET: After two days of the annual ‘Seven Days of Danger’ national road safety campaign, the Phuket toll has climbed to 17 accidents, but still no deaths reported.

The statistics, compiled by the Phuket office of the Department of Disaster Prevention and Mitigation (DDPM), list four accidents yesterday in Phuket Town, three in Kathu and two in Thalang.

Eleven people involved in the accidents were admitted to hospital; three were foreigners. All were admitted for minor injuries only.

The main causes of road accidents over the past two days have been drunk driving and speeding.

Other causes listed by the DDPM include “immediately cutting in front of another’s car”, unsafe motorcycle, poor vision and “objects blocking the path of the vehicle”.

Police so far have levied 1,003 charges for traffic offenses, including 603 for driving without a license and 300 for not wearing a helmet.

Other charges included driving an unsafe motorcycle, drunk driving, ignoring traffic signals, and not wearing a seat belt, among others.

Arriving in Phuket in time for the annual campaign is Sak Thaenchaikul, who took up the post of Chief of the Phuket Provincial Health Office (PPHO) yesterday.

He spent his first day on the job inspecting firsthand the emergency medical treatment administered by Phuket’s three government hospitals.

“Medical services at Vachira Phuket, Patong and Thalang Hospitals are ready to handle any emergency case. Staff are on shift 24 hours, and medical equipment and medicines are on standby for use in treating any injured people arriving,” he said.

Dr Narinrat was transferred to Singburi Province as part of a routine move to replace the outgoing health chief there.