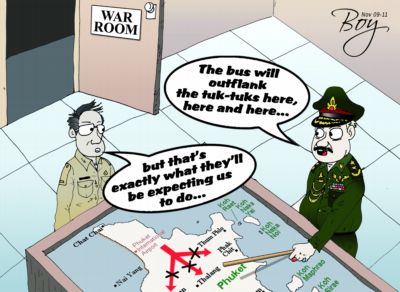 PHUKET: The Phuket Provincial Land Transportation Office has responded admirably to criticism that it has obviously failed over the past 20 years to develop public bus transportation in this province. (See front page, current issue of the Phuket Gazette. Digital subscribers click here to download the full newspaper.)

Office Chief Terayout Prasertphol says he has applied to his superiors in Bangkok to approve more bus routes on the island, adding that the precise location of stops will soon be determined. These, he says, will take into account the need for passengers to simply “hop on, hop off” en route – thus finally offering Phuket genuine bus services of the type found all over the world.

With this genuinely bold initiative, he has now thrown down the gauntlet for Provincial Police Commander Pekad Tantipong to make sure that it will be safe for operators to run these services.

Ensuring the safety of the people of Phuket is Maj Gen Pekad’s job.

But Gen Pekad does not have to carry this burden alone; he has much support. Indeed, he need look no further than the Phuket Provincial Office.

When told in late September that not a single operator had stepped up to run buses along any of the currently available routes on the island, due to fear of violent attacks from “opposing forces” – meaning private tuk-tuk and taxi operators – Vice Governor Weerawat Janpen’s face morphed into the most grave of expressions. He knew that Phuket’s public administration was failing its people.

With this in his favor, it would be very surprising if Gen Pekad did not receive robust support from Phuket’s top government officials.

The catch is that Gen Pekad must now step up and announce precisely how he intends to ensure that operators will be safe in providing the services. If he doesn’t, all these glorious plans of having normal bus services in Phuket will come to nothing.

He could assign police officers to ride the buses, but that might be a tad too ‘Africa’ for Thailand’s liking.

What Gen Pekad really needs is the overt support of the people. That covert support exists among the vast majority there can be little doubt, so it would behoove the police to devise a campaign to nurture it, to foster enthusiasm for it and to take it very public.

At the heart of the campaign would be the issue of safety. Every bus would need to carry signs in various languages telling passengers to report any acts of violence or intimidation against either themselves or the bus operator. And the police would need to provide a simple hotline for receiving such reports in mulitple languages.

To preempt any protestations that language difficulties would undermine response time, the police would only need to note that their cousins in the Tourist Police volunteers possess language skills in spades.

The residents of Phuket have the right to enjoy the same public transport facilities that are available in the rest of Thailand and throughout the world. It is asking too much now to expect the public to continue tolerating the threats and violence that are destroying the reputation of Phuket as a credible place for a holiday.
.
The decision to have reliable and reasonably priced public transport is ours. It does not belong in the hands of “dark influences” or others who would rob us wholesale for their personal financial benefit.

Phuket’s All Stars bowled over at ACG opener