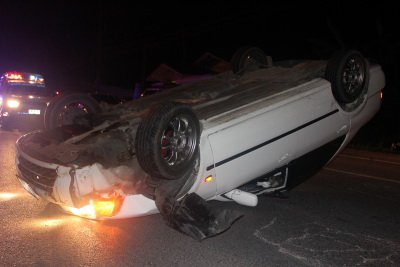 PHUKET: One car overturned, a bus was damaged and two buffaloes were killed on November 11 after a motorbike driver clipped one of the beasts as he drove past, spooking both animals and causing them to run into oncoming traffic.

Kusoldharm Rescue Foundation workers received a report at about 12:30am that an accident involving three vehicles and two buffaloes had occurred on Thepkrasattri Road about one kilometer north of Thalang intersection.

At the scene, rescue workers found two dead buffaloes in the road, a parked motorcycle, a bus with a crushed front end and an upside down Honda sedan.

The motorbike driver told Kusoldharm workers that he was traveling southbound on Thepkrasattri road when the two buffaloes walked out into the road. He said he hit one of the animals, scaring both of them, so they ran to the northbound lanes.

The pair dashed in front of the hotel employee transport bus and the Honda sedan, both of which were traveling northbound at a high speed, the motorbike driver said.

The bus hit one buffalo, while the car hit the other. The driver of the car quickly applied the brakes, causing it to overturn, a rescue worker said.

No humans were injured in the accident, and no one came forward to claim the buffalo, he added.

This is the third such incident in four months. In late July, a passenger van hit and killed two buffalo while in August, an Airport limo hit and killed one buffalo. Both incidents occurred at about 1:30am on Thepkrasattri Road in Thalang. No humans were injured in either incident.

Phuket Public Transport: The decision to have public buses is ours