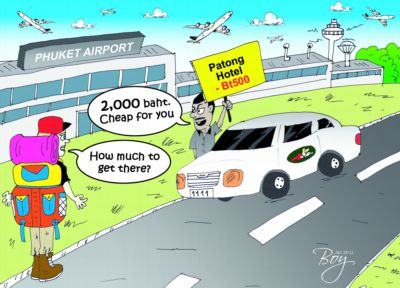 PHUKET: The results of the most recent Phuket Gazette readers’ poll reveal that a clear majority want “airport bus” services to Phuket’s west coast resort towns as the tourism development project to move ahead above all others this year.

The results indicate that among English speakers in all three of the island’s major demographics – Thais, expats and tourists – the introduction of reasonably-priced public transport is seen as more important than the ‘megaprojects’ designed at luring in ever-more visitors, or dealing with an ever-increasing number of vehicles on our roads.

An important fact to note in the statistics flowing out of this survey is that the projects in highest demand are also the least expensive.

For example, more respondents (13.3%) wanted to see the low-cost option of installing meters in taxis and tuk-tuks than realization of the glamorous 2.6-billion-baht convention center porposal, which attracted a scant 3.4%. And so it was with the underpasses at the Central Festival and Tesco Lotus intersections (4.3%) and the 3.5 billion baht Patong Tunnel (3.4%).

Indeed, the 39.7 million baht spent by Patong on the tunnel project “feasibility study” would probably have been enough to install a meter in every tuk-tuk and taxi in the province, free of charge to the vehicles’ owners.

Of course it would be naïve to suggest that public demand would be enough to make our leaders do the right thing. By their own reckoning, the phon prayot (benefits) would be few, while the “costs” could be devastating – or even lethal in the case of, say installation of meters in tuk-tuks, no matter how much the public might want them. As the events of last week have shown (see front page story, this week’s Gazette), hitmen work cheap on our resort island, even when the target is a high-profile investigative reporter.

As we move toward the end of the first month of 2012, it appears that the horse race among the six referenced projects is hardly off to a lightning start, although funding for the Central Festival underpass has been approved and we are told that construction is set to begin this year.

Most readers will know that this particular project will cause a traffic nightmare while the work is underway, and with little respite after its completion since the real bottleneck is not at the junction itself, but further south where Chao Fa West narrows down to just one-and-a-half lanes from three in each direction. Amazingly, this is where the tunnel is actually designed to emerge.

As for the two new airport bus routes “expected” to go into service by next month, don’t hold your breath. The agency which provided that time line is the same one that completed construction of Phuket Bus Terminal 2 in Rassada back in December 2009 – and has been promising to open it ever since.