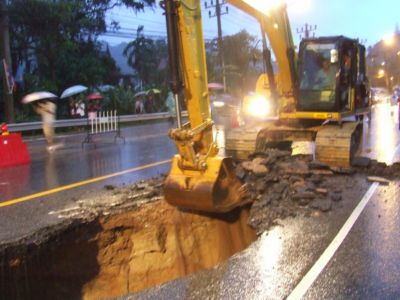 PHUKET CITY: Most Phuket Gazette readers think the proposed Patong Tunnel project should go ahead, according to the results of our latest poll.

The poll asked readers to give their views on the proposed project, which would involve digging a road tunnel through the hills that divide Patong from the rest of Kathu.

Of the 900 readers who voted, 55.6% agreed with the statement, “A tunnel would be good for Phuket. The project should go ahead.”

Around one-third of readers (32.7%) overall thought the project should not go ahead, believing instead that “more money should be spent on improving and maintaining the existing road.”

While 38% of expats agreed with this, just 28% of Thais and 27% of tourists expressed the same view.

The least popular option was to maintain the status quo.

Just 11.8% of readers agreed with the statement, “The project would cost too much. The status quo should be maintained.”

But while only 9% of expats and 12% of tourists were in agreement here, almost a third (27%) of Thai readers supported this statement.

The research team has proposed three possible routes for the tunnel, with an estimated cost of up to 2.5 billion baht.

Meanwhile, a sinkhole recently opened up on the Patong side of the hills for the second time in two months.