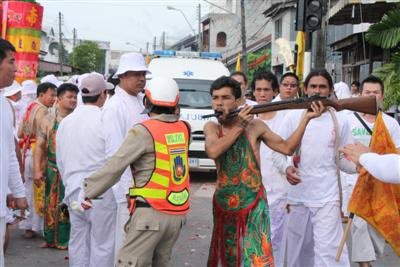 PHUKET CITY: Devotees who have spent the last eight days without meat, alcohol or sex will be able to resume their usual ways at the stroke of midnight tonight when the Chinese Warrior Gods depart and the annual Phuket Vegetarian Festival comes to an end.

As in years past, Saphan Hin is expected to be the center of activity this evening, when hundreds of mah song spirit mediums and devotees from many different shrines are expected to converge to see off the spirit of Kiew Ong Tai, who departs by water.

There have in past years been reports of violence at Saphan Hin after midnight, as some devotees go on drinking binges after the period of purification ends.

There have been several reports of injured mah song in the local media this year, including one man who was seriously injured after falling into blazing hot coals at the Tha Reua Shrine in Thalang.

It was the first injury he has sustained in ten years of being a mah song, he said.

The youth, who first became a mah song at the tender age of 8, blamed the incident on the fact that the coal wasn’t completely burned.

“I didn’t feel anything until after the spirit departed later in the evening. I started to feel the pain when I got home, so my mom took me to hospital,” he said.

“I will continue doing this because the God has chosen me,” said the young man, who was admitted for several days of treatment.

Also at Samkong Shrine, a foreign tourist who tried to scale a tower constructed of bladed steps reportedly sustained cuts requiring hospital treatment, a source in that community said.

At Bang Neow Shrine a mah song with a sharp object though his face was seriously injured when the possessing spirit suddenly departed his body at about 7am on Friday at the start of the street procession, another source told the Gazette.

The injury was perpetrated by the possessing spirit because the man failed to observe all the required rules of purification, he said.

This year’s event has been a success at the birthplace of the festival, Kathu Shrine, in the Getho area of Tambon Kathu.

Thittima Tantivit, Deputy Chairperson of the Kathu Shrine Council, said the shrine had about 200 spirit mediums this year and all are doing well.

Kathu Shrine is where the festival began in 1825 and the devotees still use the traditional departure point for the Gods, not far from the shrine near the Kathu Municipality offices.

Ms Thitima said the Khatu Shrine devotees would not join the crowd at Saphan Hin, where several city street processions converge in what usually ends up with an alcohol-driven party that starts after midnight.

Asked how she felt about the dramatic rise in the number of shrines holding vegetarian festivals not only in Phuket but in other parts of the country, Ms Thittima said she felt it was a good thing as it promoted healthy lifestyles and unity in those communities.

The weather has been mostly cooperative during this year’s festival.

The 24-hour forecast by the Meteorological Department for the period starting at 12am today calls for scattered thundershowers over 60% of the area and isolated heavy rain.