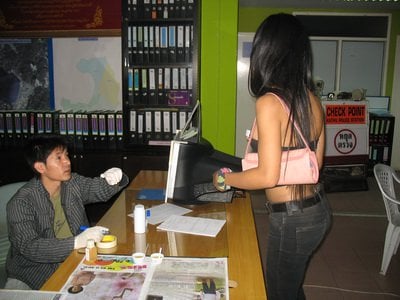 PHUKET: Almost 50 per cent of the ladyboys rounded up in a sweep of Phuket’s Soi Bangla area last night tested positive for methamphetamines, Patong Police say.

The tests were conducted by Patong Hospital workers, escorted by some eight Patong Police officers.

The testing began at about 8pm and lasted about one hour.

Those testing positive were released pending confirmation of the test results from the Police Regional Forensics Center in Surat Thani province.

The results are expected around mid-March.

One of the investigation officers said he didn’t expect the suspects to flee in the interim.

They would continue working in the area, he predicted,

In the last week, 22 people have tested positive for amphetamines in random checks conducted by Patong Police, including the 17 ladyboys, the officer said.

Phuket Police have long bemoaned the absence of an independent police drug testing facility on the island.

Many drug suspects are allowed to walk free because the confirmation process takes too long and often fails to confirm the results of on-the-spot testing.

Football Legends of Liverpool to play in Phuket