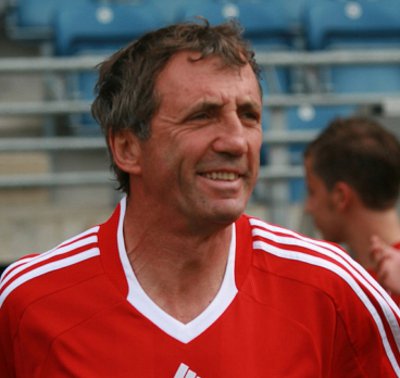 PHUKET: Liverpool Football Club fans on Phuket are set for a huge treat this June when a Legends of Liverpool team swing into town to take on a Legends of Thailand side at Surakul Stadium.

A squad that includes 15 Anfield greats will don the famous red shirt in Phuket on June 18 as part of their tour of Thailand, which will also take in a game at the Yamaha Stadium in Bangkok on June 15.

Three different eras of the Merseyside club will be represented during the challenge game.

Neal is the most decorated player in Liverpool history. In fact, no Englishman can boast more medals.

The full-back helped bring 22 pieces of silverware to the Anfield trophy room and was the only player to feature in the Reds’ first four European Cup triumphs.

Also set to line out for Liverpool in Phuket are Alan Kennedy and Robbie Fowler – both men were on the island recently to help promote the game.

Off the pitch, the Liverpool Legends team will also take part in football clinics and meet fans at shopping malls in Phuket.

Tickets will be available at www.footballlegendstour.com from April 1.

For a full report on this story, pick up a copy of the Phuket Gazette newspaper out on newsstands today.