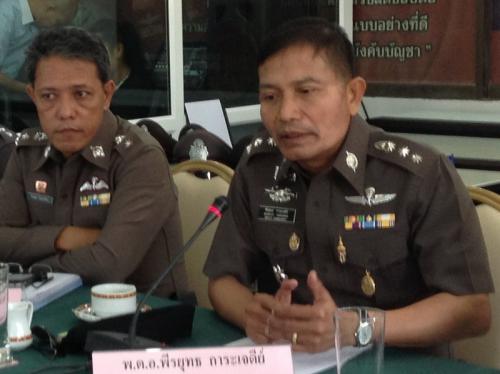 PHUKET: Foreigners passing through checkpoints at night will be stopped and searched as part of a new effort to ensure the safety of people and property on Phuket, police announced today.

Officers at police stations throughout Phuket were instructed last week to begin stopping and searching foreigners at night.

“If we find any equipment that could be used in a robbery, officers will question the driver in detail,” Col Peerayuth said.

“There is no need to carry around this kind of equipment at night,” he added.

Two Vietnamese men are suspected of using a blowtorch to rob an ATM at the Boat Lagoon of 1.6 million baht on November 7. Police believe they left Thailand the following day (story here).

On December 3, a Mexican and two Colombians used a blowtorch to rob an ATM in Patong of nearly 300,000 baht. They were later apprehended in Bangkok (story here).

From January to November this year, 247 foreigners in Phuket were suspects in criminal cases, Col Peerayuth noted, while the number for 2012 was 193 and for 2011 was 194.

The breakdown for 2013 is as follows:

Working without a work permit: 67

Offense against life or body: 11

“We have to be more strict in enforcing the law as the number of tourists and expats on Phuket is increasing every year,” said Col Peerayuth.

“We have both good and bad foreigners here, and it’s our job to try to prevent the bad ones from doing criminal acts in our country,” Col Peerayuth noted.