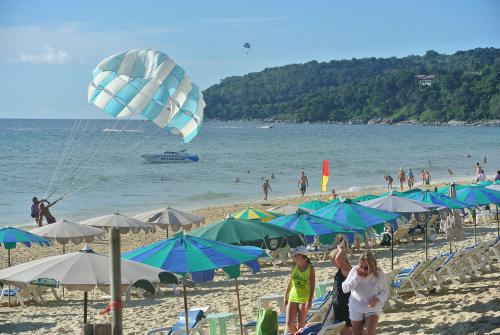 PHUKET: The drowning of a 9-year-old boy at Karon Beach over the weekend has sparked a warning from Phuket lifeguards for parents to never leave children unwatched at the beach.

“Children should never be left unattended near the surf, even if no red flags have been posted to mark it as a dangerous area to swim,” Kata-Karon chief lifeguard Uten Singsom told the Phuket Gazette.

“Right now, there are a lot of tourists at Karon and Kata beaches, which makes it difficult for us to keep an eye on children swimming among them in the surf,” Mr Uten said.

Awiruth went swimming in the late afternoon while his aunt continued working as a beach masseuse, Mr Uten explained.

“There were no red flags and no big waves on that day,” he said. “His aunt told lifeguards at about 5pm that she couldn’t find him. The last time she saw him, he was swimming near tourists in the sea.”

Lifeguards launched a search and soon found Awiruth unconscious, semi-submerged in the water.

“After about 15 minutes he seemed to revive – he moved his hands and his eyes flickered – so we rushed him to Patong Hospital.

“But the traffic that day was so bad, partly because of preparations for the Patong Carnival, that we arrived too late. A medical team tried to resuscitate him, but couldn’t,” he added.

Mr Uten urged parents to keep Awiruth’s fate in mind, and maintain a watchful eye on their children.

“This case should be a sad lesson learned for people who bring children to the beach. Never take your eyes off your children, even if there are no red flags – it might be the last time you see them alive,” he warned.

To see the “beach safety flag system” album on the Phuket Gazette’s Facebook page, compiled with help of Surf Life Saving Australia, who have been instrumental in training and assisting The Phuket Lifesaving Club please click here.