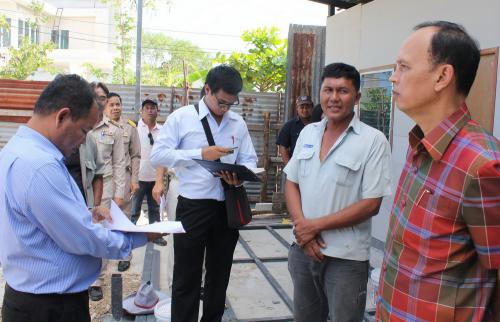 PHUKET: Police charged a man with encroaching on a protected Phuket forest yesterday after he was found building two houses amid mangroves in Wichit.

The arrest came during a raid led by Phuket Vice Governor Somkiet Sangkhaosutthirak at a site near Klong Mudong (map here).

The raid was inspired by a complaint filed by local villagers, Vice Governor Somkiet told the Phuket Gazette.

“Officers used GPS to confirm the location of the one-rai plot being built on, and found that the land was within the boundaries of a protected forest,” Vice Governor Somkiet said.

Leading the construction of the two houses was Somsak Yongyuth, 45.

“I rent the land from a man for 10,000 baht per year. I don’t know the man’s name and I have no idea whether or not the land has been issued a title deed,” Mr Somsak told the officers.

“But he allowed me to build my rental houses first and start paying rent later, so I started the construction,” he added.

Mr Somsak was taken to Wichit Police Station and charged with encroaching on a protected forest.

Police are continuing their investigation to track down the person who Mr Somsak said rented the land to him.