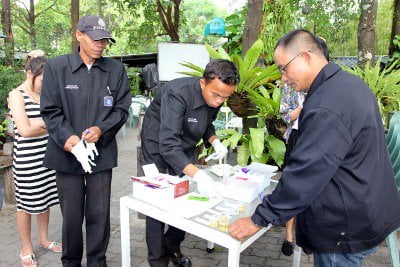 PHUKET: Phuket City Police yesterday drug tested 47 staff, including the general manager, at the Sure Garden restaurant in Phuket Town.

The mass drug testing comes amid the ongoing furore over the axe attack on Vorasit “Pla-wan” Issara, the general manager at the Sri panwa resort and son of Thai construction magnate Songkran Issara.

Mr Vorasit suffered many serious wounds in an early morning altercation with staff at the Rachada pub, which is located directly across the Bang Yai Canal from Sure Garden.

Snr Sgt Major Porncharoen Phumeesai told the Phuket Gazette, “Today we tested for amphetamines. None of the 47 people tested was found to be using drugs.”

The drug testing was held as part of the provincial-level push to eradicate drugs from Phuket, Snr Sgt Major Porncharoen explained.

“There are many entertainment places opening in Phuket and some of the staff are involved in drugs. It leads to problems and that’s why we are testing staff at entertainment venues,” he said.

Kritsakorn Dairoop, the general manager at the restaurant, said, “We usually have a drugs test once every two or three months.

“Any of our staff found to be involved in drugs will lose their job because we do not want the restaurant being associated with drugs. As the tests today [proved], none of us were found to be using drugs,” he said.

“Our customers are very important to us. We hold a meeting every month to catch up on what has happened in the restaurant. If any customers cause problems, I try to cool them down. If that doesn’t work then the police can deal with them,” he said.

“We would never use any force,” Mr Kritsakorn added.