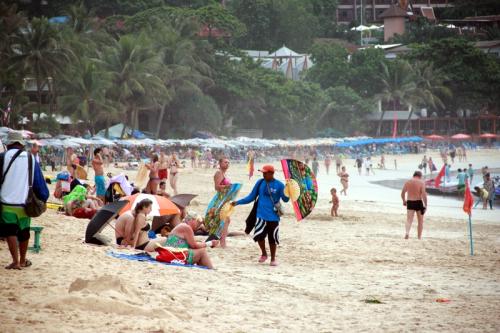 PHUKET: Karon Police are looking for a jet-ski rental operator at Kata Beach who yesterday allegedly swung an anchor at the head of a German tourist.

When contacted by the Phuket Gazette, Col Werawat Juntharavijit*, Acting Superintendent of the Karon Police, today said he had yet to be informed of the incident.

“I have not received a report about this. I will assign officers to question the beach vendors,” Col Werawat said.

A witness to the incident explained to the Gazette that the jet-ski operator had mounted his jet-skis onto a trailer and was towing them off the beach just before sundown when the wheels of the trailer ran over the German man’s belongings on the sand.

“The German man had his sunglasses and a few other things damaged, but all he wanted was for the jet-ski operator to pay for the broken motorbike helmet, which belonged to a rental shop,” the witness said.

“The beach boy refused and they had an argument… After a while, the German man gave up and started walking away, but the boy picked up a small anchor from the trailer and ran after the German man,” he added.

“It wasn’t until a woman saw what was happening and screamed, that the German man looked back and saw the boy coming at him with the anchor. The German started running at the same time the boy swung the anchor at him. The anchor missed his head by about half a meter,” said the witness.

The German ran down onto the beach, and the jet-ski operator gave chase. “When the boy realized that everyone on the beach was staring at him, he turned and walked away,” he added.

Meanwhile, Col Werawat has appealed to anyone who may be able to identify the jet-ski operator to contact the Karon Police.

“Anyone who saw the incident can contact Karon Police Station at 076-333362,” Col Werawat said.

“If anyone knows the German man, please tell him to come to Karon Police Station and report the incident,” he added.

* Correction: The original report quoted Karon Police Superintendent Col Sirisak Wasasiri, who is currently on temporary assignment with the Thalang Police in Phuket. The error is regretted.