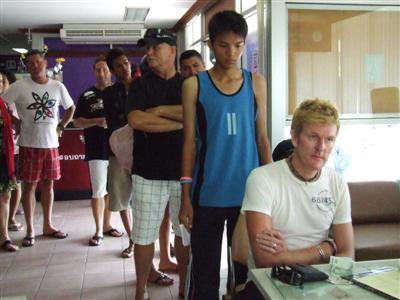 PATONG, PHUKET: Scores of motorists were stopped and charged with road safety violations at a police road checkpoint set up on Patong Hill at midnight on Sunday.

The violators, mostly foreign tourists, had to make their way to Kathu Police Station to pay fines for a variety of infractions including operating a motorbike without a helmet, driving without a license or talking on the telephone while driving.
Soon after taking office, New Kathu Police chief Arayapan Pukbuakao said he intended to put an end to the practice of fining foreigners more than Thais who commit the same traffic violations.

Kathu Police, who have jurisdiction over Patong, routinely fine foreigners for operating motorbikes without Thai driving licenses. Most others police districts in Phuket allow foreigners to operate motorbikes if they can produce a license issued in their home country, although this is technically illegal.

About 5% of those fined at Patong Hill yesterday were in cars. Most of these failed to wear seat belts.

The on-going crackdown is part of the annual effort to minimize road accidents over the Songkran Holiday.

Last year four people died and 60 more were injured in Phuket over the ‘7 days of danger’ holiday period.

Fortunately no deaths have been reported in the province thus far during this year’s Songkran road safety campaign.