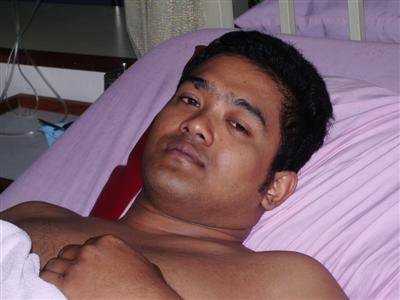 RAWAI, PHUKET:  A Thai man who helped save four children from drowning yesterday is being treated in hospital after being pulled unconscious from the water by an Italian kayaker.

The near-tragedy occurred when four Phuket City youths were swept out to sea at the South end of Nai Harn Beach, the same area where 10-year-old Apichet ‘Nong Max’ Srinakarak drowned on New Year’s Day.

Among the first adults to recognize the children were in danger was 24-year-old Choke-anan Tortop, who went in after the youths and began helping them ashore at about 4pm.

He was later pulled unconscious from the sea by Italian kayaker Raimondo Velgaudio, 32.

All four children and Mr Choke-anan were rushed to Vachira Phuket Hospital, where doctors helped the Trang native regain consciousness.

The four youths, aged from eight to 16, were treated and released at about 8pm.

From his hospital bed he told the Gazette: “I heard one of the boys say he was too tired to swim ashore, so I went in to help him. Then another. I told them to keep their legs moving and shouted for more help, but then I began to have trouble myself and went under. That was the last thing I remember. I don’t recall anything about how I got to hospital.”

It was the first time Mr Choke-anan had ever entered the sea at Nai Harn Beach, although he had visited a few times before, he said.

Former Nai Harn lifeguard Song ‘Dui’ Sa-ingtong said, “I always tell the people not to swim in that area because of the dangerous current. The force of the water swept them about 100 meters offshore, where the water is four or five meters deep,” he said.

Like most lifeguards on the island, Mr Song has been out of work since November, when a contract between the Phuket Provincial Administration Organization (PPAO) and a private firm providing lifeguard services at island beaches expired.

The PPAO hopes to resume the service soon under a direct contract with the Phuket Lifeguard Club that will see 83 lifeguards assigned to 13 island beaches by the end of the month.