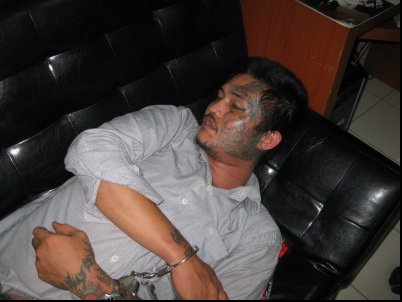 PHUKET: A planned police operation that took place throughout Phuket last week resulted in the arrest of seven members of a drug gang and the seizure of thousands of ya bah (methamphetamine) pills and half a kilo of ya ice (crystal meth).

The arrests were announced at a press conference on Saturday, organized by the Crime Suppression Unit of the Phuket Provincial Police.

Police Chief of Investigations Col Wanchai Palawan paraded five of the suspects together with the recovered drugs.

The chain of arrests started on June 2 when 27-year-old Katha “Khai” Kijnakom, who was already wanted on an outstanding warrant for drug-related offenses, was apprehended at an apartment in the Eua-Athorn (“We Pity You”) public housing estate in Srisoonthorn, Thalang.

A search of the apartment recovered 500 milligrams of ya ice, an improvised handgun and four rounds of ammunition.

Aphinan “Arn” Saetiew, 25, was arrested in front of the Samkong Municipality School on Yaowarat Road with 1.25 grams of ya ice in his possession.

The final arrests came on Friday, when police arrested two men who had just arrived at the new bus station on Thepkrasattri Road from Bangkok.

Adisak Wai-ar-sa, 22, a motorbike taxi driver in Bangkok, and Suppakij Sae-iew, 18, were found to have 6,000 ya bah pills and 500g of ya ice in a bag that they claim not to have known the contents of.

Police stated that Ms Janya had ordered the drugs from a man in Bangkok, who hired Mr Adisak and Mr Suppakiy to deliver them to Phuket for 30,000 baht.

All seven are now being held at Phuket Provincial Prison.

Police said that so far officers had seized as evidence about 20 bank books, a car and a pickup truck in the arrests.

Police are guarding further information carefully as their colleagues in Bangkok have been alerted to three others wanted for questioning, including Ms Janya’s contact in that city.