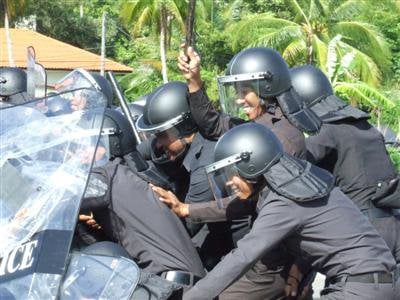 A total of 310 officers from all eight police districts in Phuket took part in the exercises, the first in a series of monthly drills to be conducted in all Police Region 8 provinces throughout 2010.

This morning’s exercises consisted of the police first trying to negotiate with an unruly crowd of volunteer rioters armed with sticks.

When peaceful measures failed, police with shields marched forward in phalanx formation to disperse the crowd as officers behind the main formation blasted them with a water cannon and threw tear gas canisters.

After the exercises, Gen Pekad commented to his forces that they appeared to have strong group will, but still lacked the cohesion to carry out the drills to maximum effect.

“We need more practice to increase efficiency,” he said.

Observing the drills as an invited guest was Greg Miller, Chief of the US Embassy’s Bangkok-based Force Protection Detachment unit.

Mr Miller is in Phuket to prepare for the arrival on Sunday of three US Navy vessels (USS Nimitz, USS Pinckney, USS Rentz) for four days of rest and relaxation for some 6,000 US sailors and marines.