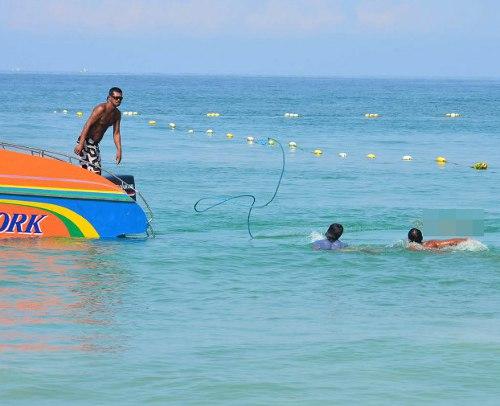 PHUKET: Police investigating the death of a Dutch tourist whose body was discovered floating off Patong Beach yesterday will send the man’s body to Bangkok for an autopsy in order to identify the cause of death.

The body of Stephan Buczynski, 26, was discovered at about 9:30am by a tourist riding a jet-ski some 500 meters offshore from the north end of Patong Beach.

Mr Buczynski had suffered a deep gash to the back of his head, leading police to believe that he was struck by a boat propeller while swimming or was viciously attacked from behind by an assailant.

“We believe he died about four hours before his body was found,” Capt Patapee Srichai of the Patong Police said.

“He was dressed only in black swimming trunks… A waterproof bag was still looped around his neck, containing his passport, as well as cash totaling 5,200 baht and 1,850 euros,” he added.

Also in the waterproof bag were nine pills of Alprazolam, better known by the trade name Xanax, which is a restricted drug available in Thailand by prescription only.

“He might have been hit by the blade of a passing boat while swimming or he may have been beaten to death and his body thrown into the sea. At this stage, we just don’t know,” Capt Patapee explained.

“On Saturday night, he and his friend went out to a bar. They separated after midnight and his friend eventually returned to their hotel room. When Mr Buczynski’s friend awoke in the morning, he discovered Mr Buczynski was not in the room,” Lt Col Nikorn said.

“The friend knew nothing of what happened to Mr Buczynski. He learned of the death only after he was informed by police,” he added.

Police questioned jet-ski and speedboat operators and beach vendors to determine whether they had seen Mr Buczynski on the beach before his death or not. They said they did not recognize him, Lt Col Nikorn said.

“The body will be sent to Institute of Forensic Medicine Police General Hospital in Bangkok tomorrow,” he added.