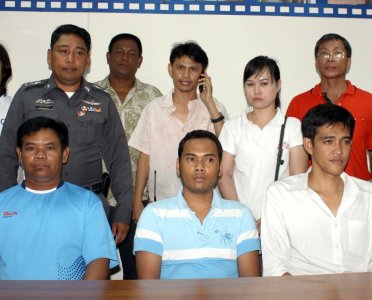 PHUKET: Chalong Police yesterday held a press conference to announce the arrest two employees of a camera store in Chonburi for allegedly defrauding a camera store owner in Phuket out of more than 150,000 baht’s worth of photographic equipment.

Ya Paenkaew, a local motorcycle taxi driver, is also in police custody for his alleged role in the scam.

Anankorn Itthi-atsakorn, owner of the Digital One Studio in Chalong, told police he ordered a Canon camera, 200mm lens and battery clip from World Camera in Chonburi on July 7. The goods cost 161,699 baht.

World Camera arranged to ship the products to Phuket using Thailand Post’s EMS service. On July 10, when the products were due to arrive, Ms Anankorn called Rawai Post Office.

“I was told that it would be at the post office at around 11am. The staff assured me when the package arrived it would be sent to my home,” she said.

By 2:30pm, no package had been delivered so she went to the post office to collect it herself. Mrs Anankorn was shocked when staff there told her the package had already been collected.

She asked to see copies of documents the collector used to identify himself.

“He told the post office staff that he was an employee of my shop sent to collect the parcel, but all he had with him was the 13 figure EMS parcel number,” she said.

The alleged impostor, wearing a motorcycle taxi uniform and helmet, did not show his ID card or any other form of identification, she said.

He signed for the package with the name “Ya”.

“Despite the fact that he wore a motorcycle taxi uniform and a helmet into the post office, the staff still took his word that he was an employee of mine,” Mrs Anankorn alleged.

Staff questioned the man on the address and shop name that was on the package.

“He was not able to correctly identify the shop name, nor the address. He had to visit the post office three times before they finally gave him my package,” she said.

Officers soon arrested Mr Ya, who used his real name when signing for the goods.

Under questioning Mr Ya allegedly told police he had been paid 200 baht by Phayak Nakhadee, a 25-year-old sales employee at World Camera in Central Chonburi, to collect the equipment.

Mr Ya said Mr Phayak received the goods from him at Chalong Temple before fleeing the island.

Mr Ya later confirmed that a photograph of Mr Phayak shown to him by police was that of the man who hired him to collect the goods.

Further investigation allegedly revealed that Rachot Piamjit, another World Camera employee, was also involved. A court arrest warrant for both men was obtained.

On September 4, police arrested both men. Mr Phayak was picked up at an apartment block in Huay Kwang District in Bangkok, while Mr Rachata was arrested at Central Plaza shopping complex in Chonburi.

Both men have denied charges of conspiracy to commit fraud.

Chalong Police Superintendent Wichit Intorrasorn said he suspected such scams were rife, but that few perpetrators were brought to justice.

This time Chalong Police had unmasked the culprits, he said.

The suspects had probably carried out the fraud many times in many areas, until they tried the ruse in Chalong Police District, Col Wichit added.

Swiss man falls to his death in Phuket