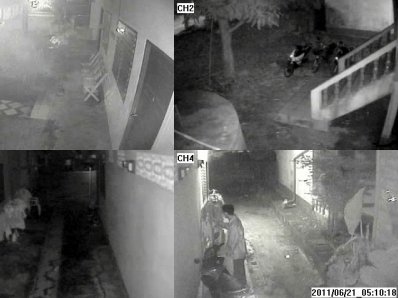 PHUKET: Phuket police are on the lookout for a panty snatcher caught on CCTV stealing underwear from outside a woman’s apartment near Wat Kittisangkaram (Kata Temple).

The CCTV footage, taken on June 21, shows a man wearing trousers and a light-colored jacket lingering near a laundry rack outside the apartment at about 5am.

The man glanced in several directions as he shuffled closer to the rack before recoiling as another man approached the narrow passageway.

The other man, who had been in a neighboring apartment, came outside to check on the loiterer as he hadn’t seen him before and he looked suspicious, a police source told the Phuket Gazette.

The man in the jacket awkwardly pulled out his mobile phone to “check it” as the suspicious resident appeared to exchange words with him.

The suspect then walked off, out of the camera’s range while the other man entered his apartment.

Within seconds, the man in the jacket reappeared, casually walked up to the laundry rack, snatched the panties and walked off.

The owner of the room, whose identity was undisclosed, reported the incident to her landlord when she noticed that her panties were missing.

The landlord checked the CCTV footage and handed it over to Chalong Police who are now investigating the incident.