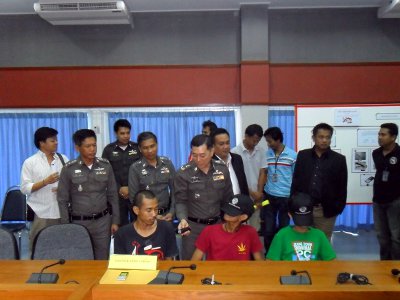 PHUKET: Police have arrested three young men who have confessed to the stabbing murder of Phuket teen Thawatchai “Ton” Maelanon, whose body was discovered in a rubber plantation in Thalang on March 26.

The other two youths, both 16, were presented to the media with their faces covered.

Although their names cannot be released through the media because they are minors, police did reveal that one of pair bears the surname of a highly prominent Phuket family.

According to police, the three on March 19 lured the 15-year-old fellow gang member to a remote location off Thepkrasattri Road with the intention of shooting him.

In their confession, the three said they had given the boy 5,000 baht for the purchase of ya bah (methamphetamine). They became furious when they learned he took some of the drugs by himself, sold the rest – and ignored repeated demands for repayment.

When they reached the site, a rubber plantation along the access road to Namuang Village, Apirak tried to shoot the boy, police quoted the boys as saying.

When the gun failed to discharge, one of two youths stabbed him once with a sharpened chisel. He then turned the weapon over to Apirak, who continued the assault, police said.

The three left the scene only after they were sure Thawatchai was dead.

Also presented to the media was evidence including a Thai homemade handgun and a mobile phone.

All three were arrested last night and charged with conspiracy to commit murder and weapons charges.

For an in-depth report on teenage gang violence in Thalang, pick up the latest hard copy of the Phuket Gazette on news stands around the island.