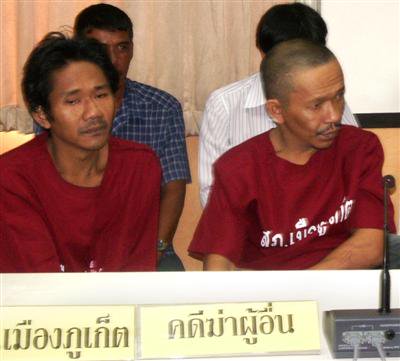 PHUKET: Two brothers have been arrested after nearly two months on the run and charged with stabbing their neighbor to death for ‘making too much noise’.

Phuket natives Niphon, 37, and Niphan Kruae-in, 36, were arrested yesterday for the March 21 slaying of 41-year-old Ponsan Noi-oonsaen, a native of Chiang Mai.

The brothers were hiding in a hut on a rubber plantation in the Nakkerd Hills behind Wat Luangpu Supha in Chalong.

Phuket City Police Superintendent Wanchai Ekpornpit said at today’s press conference, “Police have been searching for these suspects and eventually learned that they were staying on the hillside. Yesterday, around 10pm, we sent about ten officers to arrest them.“

“The officers had to trek for about one hour from the foot of the hill up to the hut where they found the Kruae-in brothers sleeping,” he said.

The suspects did not attempt to flee and surrendered to police, Col Wanchai said.

Witnesses to the murder, which took place in Rassada, said both men attacked Mr Ponsan.

Only Mr Niphan has confessed to the crime, however.

The brothers told police they were stressed out at the time of the murder because they were unemployed.

Mr Ponsan, who lived next door, had been drinking and talking loudly with a co-worker.

He had also been cooking fish, the smell of which annoyed the two brothers, police quoted the pair as saying.

According to the suspects, the final straw was when they twice told him to quiet down, to which Mr Ponsan responded by approaching them and shouting, “How am I being noisy?”

The response to Mr Ponsan’s query was the fatal stabbing to which Mr Niphan has now confessed.

Both men fled after the killing. According to their statement, they disposed of the knife near the Phuket Provincial Administration Hospital, police said.

Both men are being held on murder charges while police continue their investigations.