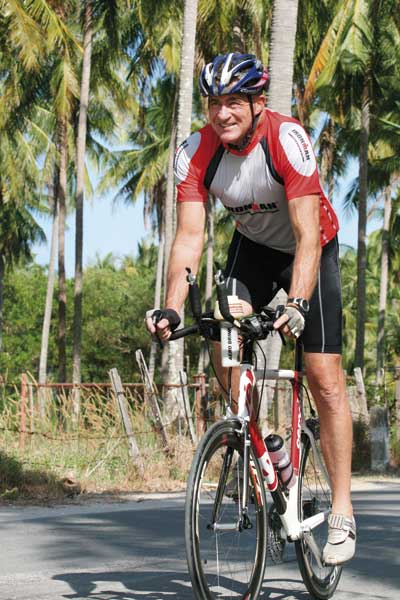 PHUKET: Phuket resident Les Bird is a man who takes pleasure in pain, and a man who has been praying for rain so he can test out his new Size 14 waterproof hiking boots.

The 59-year-old plans to climb Mont Blanc – Europe’s highest and most deadly mountain – in July, and hopes to raise one million baht for needy Phuket children in the process.

A veteran Ironman triathlete, Les has been making his Phuket training increasingly tough for himself in recent weeks, adding more weights to his hiking bag, running three times consecutively up to the Big Buddha in the Nakkerd Hills, cycling 150 kilometers a day and swimming with a weight belt off Bang Tao – all in preparation for his Alpine ascent.

Earlier this month, Les ventured to Lantau Island, Hong Kong, for a break at his holiday home.

Most mornings he took a leisurely 934-meter hike to Lantau Peak, interspersed with a light 20-kilometer run and a spot of technical climbing on cliff faces, taking the odd breather while dangling from overhangs by his fingertips.

“The view was quite spectacular,” Les recalls.

For a man who has spent most of his life in the line of fire, Les takes his training in stride.

After all, he served from 1976 to 1997 in the Royal Hong Kong Police Force. As Police Divisional Commander, Les was in charge of 1,000 officers. He has been shot at by drug traffickers, lost close friends in the line of duty and was involved in one of the most successful international narcotics operations in Royal Hong Kong Police history.

Although his days chasing criminals are over, Les still relishes the odd brush with danger, and this summer’s climb will see him take some fearsome risks to reach the summit.

Known as the White Mountain, the 4,810-meter (15,781 foot) Mt Blanc claims at least a dozen lives each year, many from from summer avalanches.

Les will be climbing in a two-man team with fellow Brit Harry Taylor. A former Special Air Service (SAS) soldier, Taylor was the first man to traverse the Pinnacles, on the Northeast Ridge of Mt Everest in 1988.

“There is no way of knowing how Les will cope with altitude until he actually goes up Mont Blanc,” Taylor said.

“I have seen Les push himself to the absolute limit, then stay on that limit for hours on end, totally in control. This is a rare quality and one that I’m sure will see him to the top,” he added.

With only three years’ climbing experience gained 40 years ago in his native England, Les said his goal of raising one million baht for Phuket children will spur him to the top.

Since 1998, the Child Watch Phuket foundation has helped over 1,500 impoverished, orphaned and abused children with education scholarships, day care services and shelter through its Phuket Town and Kathu centers.

“If Phuket people would be so kind as to donate for my climb, the money would go to a very worthy cause,” said Les, adding that when he reaches the summit, he will plant the Thai national flag at the top.

Payment can also be made though  the Phuket Gazette website at thethaiger.com/cardpayment