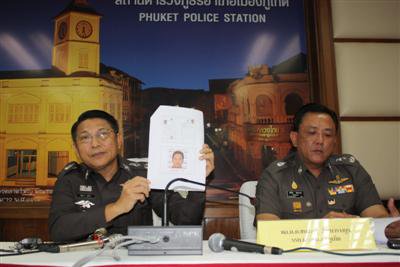 PHUKET: The first suspect wanted in connection with the shooting murder of Phuket reporter Wisut “Ae Inside” Tangwitthayaporn last Thursday has been arrested and is set to appear at a police press conference today.

An arrest warrant for the suspect, 43-year-old Petchburi native Noppadon “Pae” Praisri, was approved by Phuket Provincial Court on Saturday.

The exact time and details of the arrest will be announced at Phuket City Police Station today.

As this report was being prepared, police investigators were still searching for the alleged murder weapon, a 9mm gun, in a pond off the bypass road in Rassada.

Police believe Mr Noppadon was the gunman in the killing, while another suspect, still at large, drove the motorbike and tracked Mr Wisut in the minutes before the murder.

Police hope the arrest and subsequent questioning of Mr Noppadon will be the key to unlocking the mystery behind killing, which many believe was related to Mr Wisut’s work in exposing illegal issuance of land title deeds through his journal Inside Phuket.