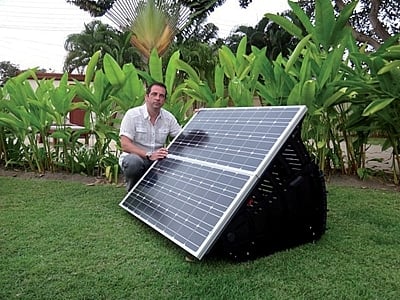 PHUKET: An innovative new solar power system will be making its world premier in the coming months, with Phuket to serve as a pilot market, and possibly a manufacturing base.

Its inventor, Ivan Peeters, spoke exclusively with the Phuket Gazette, unveiling details about the innovation for the first time ever.

The Belgian entrepreneur, reinforced by Singapore-based backers sharing a common vision to develop practical and affordable green energy solutions for the mass market, said that Phuket is particularly appealing due to its abundance of sunshine, coupled with a growing demand for alternative and affordable sources of energy.

At the core of the innovation are photovoltaic solar panels. While solar panels themselves are nothing new, the mechanism in which the technology will be applied is.

Unlike traditional, fixed-place systems, the Powerrrup provides optimized yield efficiency thanks to its mobile and flexible properties.

Ivan explained, “The problem with rooftop panels is that they are fixed at one particular angle and can’t follow the path of the sun throughout the day. People with a lot of money might consider investing in an automated tracking system, but this can be expensive and you end up using more energy than you can get returned, and thus defeat the purpose.”

“Typically, people install many panels on their roof to increase the energy yield. There are several issues with this approach. Not only are the panels not operating at full capacity throughout the day due to the angle of the sun, but the weight of many panels puts stress on the roof and the building structure, which may end up costing one more in the long run.

“Another problem is the risk of damage to the panels from storms, wind and rain. Moreover, there are complications with cleaning and maintenance….”

Easy to position and move around to suit various grades of terrain, the Powerrrup mount is made from recyclable polypropylene material and its basic design allows it to be set between 25 to 45-degree angle tilts.

While many people tend to presume that renewable energy such as solar power is not as cost effective as fossil fuels, Ivan, an accomplished engineer, suggested the contrary.

“When people invest in diesel generators for back-up or supplemental power systems, they also incur continuous costs as they need to keep buying fuel. With solar systems, there is only a one time start-up cost, and as long as the sun shines there are no more recurring costs – other than replacing the battery or converter after 10 years, and a new panel after about 20 years,” he said.

“In other words a solar panel can produce enough energy in its lifetime to create six of the same panels. Meanwhile a barrel of oil has enough energy to produce only five [barrels of oil]. As time goes on the EROI for oil is decreasing, while that of solar is increasing,” Ivan explained.

While most existing green businesses might be considered viable as a niche market for a minority, the Powerrrup system has been designed for a broader, mass market.

“The system is ideal for everyone who has a need or desire to become more self sufficient and to reduce expenses amid rising energy costs. Large and small-scale offices, firms, bars, etc, as well as homeowners, and even those living in apartments and condos with space on their balcony, can benefit from, and more importantly, afford the system,” he said.

Talking about plans in 2012 and beyond, Ivan said, “As part of the pilot phase, we’re looking to collaborate and have discussions with officials and other like-minded businesses and organizations in Phuket. But we aren’t necessarily looking for investors,” he said.

“We are developing several more innovative green products that we plan to launch in the coming years. Ultimately, we’d like to localize manufacturing of our products by establishing a factory in Phuket which could employ several hundred locals,” he said, noting that the bulk of materials used are currently sourced from China.

“If everything goes well, we plan for an official launch of Powerrrup by September and are also keeping an eye on the markets in the Philippines, Malaysia, Indonesia and Singapore,” he added.

Phuket Business: Trade, investment and green innovation on the up