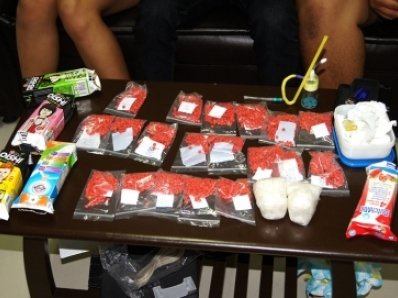 PHUKET: Procedural problems in drug testing are crippling efforts by the Phuket Police to suppress narcotics use on the island, a provincial committee on drug suppression was told last week.

There are currently 27 different anti-drug projects on the island under an 11.4-million-baht budget earmarked for drug suppression at the start of fiscal 2011, Gov Tri said.

The heads of various sub-committees should submit progress reports every 10 days so that strategies can be reviewed and changed if necessary, he said.

The committee was told that the use of ya ice (crystal methamphetamine) continues to increase despite its high price and there was a continuing rise in illegal drug use among Phuket youth, especially students.

There are currently 1,500 people in the province undergoing court-ordered drug treatment programs, the committee heard.

Police continue to claim that verification of the results of urine tests administered here in Phuket is taking too long.

In a meeting on that issue on Friday, Phuket Provincial Police Deputy Komol Wattarakorn urged the Forensics Police Bureau in Bangkok to establish a certified drug testing center in Phuket.

Under current procedures, police conduct random urine tests at nightclubs and other night entertainment venues around the island. They also test in several hotels that have agreed to take part in the police ‘white hotel project’, under which staff agree to be tested.

However, under current police procedures samples need to be collected and sent to Vachira Phuket Hospital. From there, they are forwarded to regional Forensics Police testing centers in Surat Thani or Trang for verification.

Often the samples are too old by the time they are tested for verification and the results don’t match those of the original test, he said.

Establishing a test center here in Phuket would greatly reduce this problem, he concluded.

Statistics recently released by the Phuket Provincial Police showed a 32.5 per cent jump in the number of drug cases reported from 2009 to 2010, when 3,492 people were arrested and charged with drug offenses.

A total of 333 people were arrested on drug charges in December 2010 alone, a 64 per cent increase over the figure for December 2009.