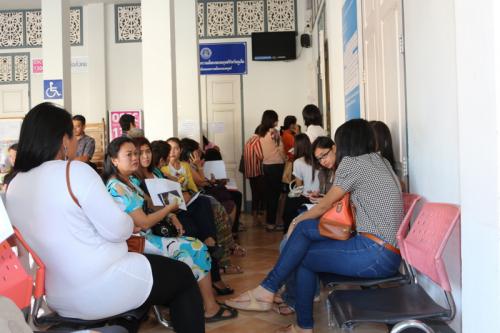 PHUKET:The Phuket Passport Office opened its doors today despite the fact that Provincial Hall remains closed due to anti-government protests.

The office closed last month after the Passport Division in Bangkok terminated its server connection with provincial passport offices as a precaution during protests in the capital (story here).

Many of the people who queued for service today were turned away.

“We have a limited amount of time to get everything processed, so we can only see about 120 people per day,” Phuket Passport Office Chief Siriporn Tantipanyathep told the Phuket Gazette.

“We have to get our work done by 3:30pm so we can send the information to Bangkok. The Department of Consular Affairs has to process everything by 5pm.”

Many residents of Phuket and neighboring provinces arrived this morning in hopes of receiving passports.

“My husband and I left Krabi at 3am to apply for a passport for our baby. We missed our chance, just like so many others,” said a woman waiting outside the office.

“We will be back tomorrow; today was not our day. I wish they could serve more than 120 people.”

Ms Siriporn apologized for the inconvenience.

“I know that many people arrived early in the morning to get in the queue,” she said.

“I believe we have enough passports for everyone, but I would like to ask people who are not in immediate need to apply later. We would like to serve those in urgent need first.”

The office is open Monday to Friday from 8:30am to 4:30 pm. Visitors must use the entrance at the back of the building as the main entrance to Provincial Hall remains closed.