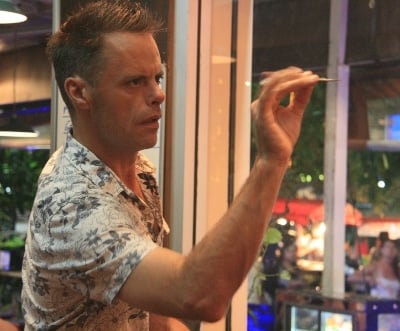 PHUKET: It was a lethargic start to the new year by both Hemingways sides, the heavy Christmas sessions obviously taking their toll.

There were plenty of tons and some 140s this week, but no 180s. Even with a strong line up, Shakers found themselves 6-0 down before getting on the scoreboard, when newcomer Nik (Shakers) held his own against curly-haired journalist Chris.

After a few weeks of mediocre darts from KonTiki Dive school owner Michael (Hemingways), he finally found his form with some great darts and a 112 checkout in his first game, narrowly missing out on another 100+ checkout by millimeters in the second game.

The beer leg went to Hemingways B for the second week in a row. The final score, 10-3, did not carry enough points for Hemingways B to close the gap on league leaders Hemingways A.

Hemingways vs Market Bar
In a battle of the first- and third-place teams, Swedish pro player Rappe (Hemingways A) went about business as usual to take both points from Paul. Ay, who hit a 180 in a friendly match against Hemingways B last week, notched up another victory and two points over Ross (Market). Big Ronnie (Hemingways) only managed 1 point against Geoff (Market), who more than held his own and kept any nervousness in check on closing out a double.

Joy (Market) collected another scalp, taking one game from former UK semi-professional player Tony C. It was only the second game that Tony has dropped all season. The remaining games went to Hemingways A, including the all-important beer leg. Final score 2-11.
Beach House vs Starfish Bar
Visa runs prevented this match taking place. Stand by for a new date. Rumor has it that Beach House bottled it because Starfish are finding some form lately… it’s just a rumor though.
Celtic Bar vs Pogues Mahon
The clash of the Irish bars is always a good night, and this one was no exception. Not much detail escaped the clandestine meeting other than Celtic bar beat Pogues Mahon 8-5 and took the beer leg too. Some high scoring from Paul and Dave from Celtic helped Liam’s lads take the game.

Note: Please send match photos, together with a caption, to news@phuketgazette.net for inclusion in this forum. Please keep in mind images must be free of alcohol products or advertisements.

Alien landing in Phuket tonight, and other events