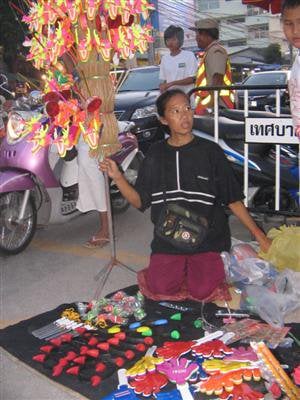 BANGKOK (The Nation, Gazette): Despite the recent arrests of two key People’s Alliance for Democracy (PAD) leaders, the group’s Phuket members will refrain from taking any action in the province until the end of the Vegetarian Festival 2008 that ends tomorrow, its leadership has confirmed.

Following the arrest of core PAD leader Chaiwat Sinsuwong last Friday, Southern region PAD coordinator Sunthorn Rakrong said the PAD would launch protests at strategic locations, including along highways and at airports, train stations and city halls to protest against the arrest.

On Saturday however, Natjarong Ekpermsup, a committee member of the PAD Phuket branch, said that his group had no plans to protest locally against Chaiwat’s arrest, primarily because the annual Vegetarian Festival was still underway.

In fact, the local PAD had suspended its meetings for the duration of the event, he said.

After the festival, peaceful activities will resume in an effort to educate people – but without disturbing the local tourist industry, he added.

Yesterday, Maj General Chamlong Srimuang, one of the most charismatic and well-known of the PAD leaders, was arrested when he went to cast his vote in the Bangkok City election.

Arrest warrants for Chaiwat, Chamlong and seven other PAD leaders were issued on August 27, a day after PAD members took over Government House in Bangkok.

If found guilty of insurrection, they could face life imprisonment or even death.

Today, the Gazette again asked Mr Natjarong if the arrest of Gen Chamlong would spur the Phuket PAD to protest locally.

Again, Mr Natjarong reiterated that local PAD activities would remain on hold until after the Vegetarian Festival, at which time between 300 to 1,000 Phuket PAD members are expected to begin planning to travel to Bangkok to join some 400 other die-hard PAD members from Phuket who are already encamped in and around Government House.

The actual number would likely depend on how the continuing political crisis unfolds, he said.

The PAD is still very popular in Phuket, with many local shops airing ASTV broadcasts of the events all day long. However, the PAD’s popularity in Phuket did take a hit when its protests at the airport on August 29 turned ugly, resulting in an unprecedented two-day closure of the facility that hit the local tourist-based economy very hard.

After that, Mr Natjarong held a press conference denying that PAD members were involved and blaming the airport closure on “agitators” who sympathized with the PAD’s cause.