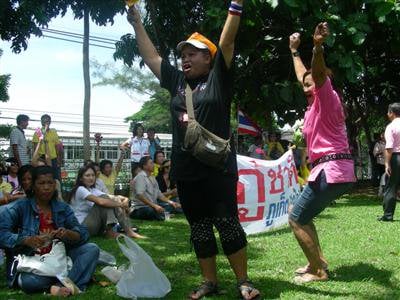 PHUKET CITY: People’s Alliance for Democracy (PAD) protesters began gathering at Phuket Provincial Hall (Sala Klaang) at 8 am this morning, their numbers increasing all morning to reach about 500 by 11:30 am.

The protesters, taking cover from the sun under six tents, plan to board five tour buses to Bangkok to join fellow PAD protesters in the capital.

The coaches are expected to depart this afternoon.

The Phuket PAD travel plans come despite Bangkok being declared under a state of emergency following a clash between pro- and anti-government supporters there early this morning, at about 1:30 am.

Under the emergency decree, which applied only to the capital, gatherings of more than five people are prohibited.

Officials at Phuket Provincial Hall provided the PAD with electricity for their public address system, Gazette reporters at the scene noted.

Some 200 PAD protesters at Phuket International Airport have also been asked by the local PAD leaders to come and join the group at Provincial Hall, where they plan to present Governor Niran Kalyanamit or one of his deputies with an official letter explaining why Prime Minister Samak Sundaravej must resign.

However, by noon there was still no report that the Governor had met with the PAD protesters.

Employees of state enterprises and teachers are also joining the protest.

State of Emergency announced in Bangkok