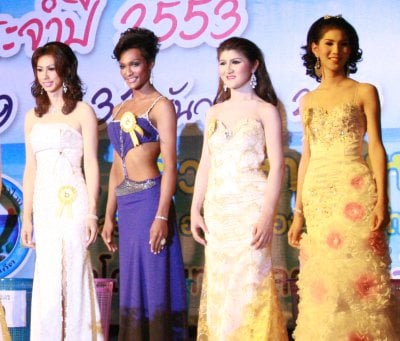 PHUKET: Residents in the south of the island have started their Phuket New Year celebrations a little early this year, with the opening of the Rawai Sky Night Festival 2010 at Nai Harn Beach.

The festival continues tonight, with stage and live music performances from 6pm.

In addition to the live performances and contests, local vendors are selling food, drink, clothes, trinkets and souvenirs along the road near the beach.

At midnight, Vice-Governor Weerawat Janpen will lead the countdown to the new year, culminating with the release of 300 khom loy (fire lanterns) to the the sky.

He told the crowd that Rawai Municipality is staging the event to support tourism and culture in the area, which is home to many tourist attractions, including Rawai Beach, Nai Harn Beach and the iconic Laem Phromthep peninsula.

To get the festival underway, the main event on the opening night was the Miss Prang Chompoo Beauty Contest for ladyboys.

The 16 contestants, aged between 16 and 30, in fine evening gowns drew cheers from the large crowd, many of whom moved close to the stage to take photos of their favorites.

Phuket Person of the Year Award to be announced today